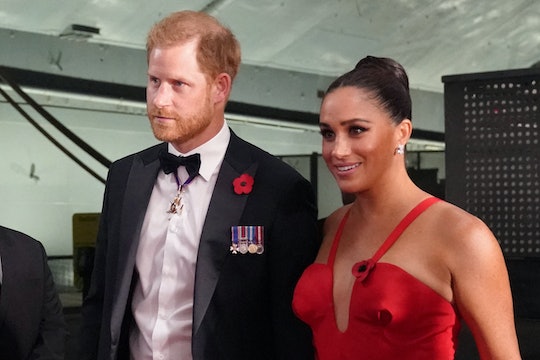 What Are The Odds That Prince Harry & Meghan Markle Will Go To The Oscars?

It would be great to see them on the red carpet.

First there was the move to Montecito, California. Then there was the infamous interview with neighbor Oprah Winfrey. Then there was a deal with Netflix, another interview with another famous neighbor, Ellen DeGeneres. Really hitting all of Hollywood. What’s next for the Duke and Duchess of Sussex? Could it be a night at the 2022 Oscars, assuming, of course, that there will be a night at the Oscars this year? It seems that their attendance might boil down to one movie that struck a particular chord with Prince Harry and whether or not the star of said film is actually going to be on hand.

A source close to the couple told OK! magazine that Prince Harry was really not a big fan of the biopic Spencer starring Kristen Stewart as his late mom Princess Diana. “It’s struck a sour note. He’s pretty appalled with the film,” the source claimed, adding that a potential run-in with Stewart could keep the father of two from attending his very first Academy Awards. Which does make a sort of sense considering how much of Spencer was focused on his mother’s relationship with the royal family. Not to mention a young actor played him in the movie; imagine how awkward that conversation could be?

Prince Harry might avoid the Oscars because of ‘Spencer.’

Meghan and Harry have reportedly been invited to several Oscar after-parties, according to that same unidentified source, “and planned on attending the Oscars, too, but they'd almost certainly come face-to-face with Stewart since she's a lock for a Best Actress nomination.” Which could well keep them away.

If Prince Harry does indeed decide to stay away from the Oscars to avoid stars from Spencer, it’s a real shame. Stewart explained last October that it was actually the relationship between Princess Diana and her sons that she most wanted to get right. “Her strength, power, and feral, unstoppable force of nature really came out when she was with her kids, because she wasn't very good at protecting herself, but she was very good at protecting them,” Stewart told Entertainment Weekly. “As an outsider, I could feel it. That, I wanted to protect, and that was a scarier aspect of making the movie because if you don't get that right, you don't get her right.”

Hopefully Prince Harry will put aside his reported reservations and hit the red carpet with his wife on Oscar night. Of course, this glamorous couple have hit several red carpets in their time together, including the premiere of The Lion King in 2019 when they met JAY-Z and Beyoncé. But this would be their first Oscars together. We will have to wait and see if they show up for the Oscars on March 27.