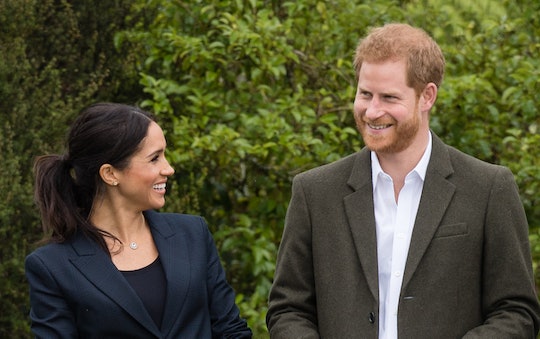 Meghan Markle & Prince Harry Are Having A "Quiet" Christmas

Archie will surrounded by his parents and grandma for the holiday.

As they prepare to celebrate their first holiday season as California residents, Meghan Markle and Prince Harry's Christmas plans for 2020 sound as chill as you'd probably expect. The Duchess and Duchess of Sussex are reportedly planning on cooking and just hanging out as a family.

A source told Entertainment Tonight that the couple and their 1-year-old son, Archie, will reportedly have a "quiet" Christmas at their new home in Montecito, California with Markle's mom, Doria Ragland. "Meghan, who is an accomplished cook, will be preparing some of their favorite dishes with Harry and Doria pitching in," the source told the outlet.

Markle is no stranger to hosting for the holidays. In a 2015 interview with Grazia Daily — back when she was an actress who ran a blog called The Tig — Markle shared her best tips for entertaining during Christmas. She not only shared a recipe for a delicious looking holiday cocktail, but gave her best decorating advice, and admitted that she ends up "buying way too much of everything for holiday meals."

Markle and Prince Harry have already started getting into the holiday spirit this year. Earlier this month, they were spotted purchasing a Christmas tree, according to People, and Markle reportedly sent her "neighbor," Oprah Winfrey. a Christmas gift containing ingredients to make the perfect oat milk latte. This is, understandably, a big holiday season for the couple as it's their first since stepping down as senior members of the royal family and second with their adorable son, who was only 7 months old for his first Christmas.

Last year, the family of three reportedly spent Christmas in Canada, according to Elle, surrounded by Markle's close friends and her mom, Doria. But traveling to Canada or Prince Harry's hometown in the United Kingdom is out of the picture, especially during the current coronavirus pandemic, as Harper's Bazaar reported.

The couple also celebrated the holiday season last year by releasing a digital Christmas card with Archie through the Queen's Commonwealth Trust on Dec. 23. Hopefully this is one tradition that they'll continue in 2020 as well.