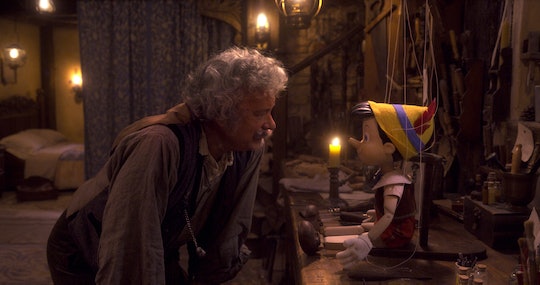 Everything You Need To Know About Disney’s Pinocchio Remake

Most importantly, Tom Hanks is taking on the role of Geppetto.

Disney fans were introduced to Geppetto, Pinocchio, and Jiminy Cricket all the way back in 1940, so it was only a matter of time before the classic film got a live-action update. Indeed, Disney is remaking Pinocchio with an all-star cast including the one and only Tom Hanks.

The story of Pinocchio follows a wooden marionette puppet named Pinocchio, who is crafted by a woodworker named Geppetto. One night, when Geppetto sees a falling star, he wishes that Pinocchio could become a real boy. After the Blue Fairy grants Geppetto’s wish, she assigns Jiminy Cricket to be Pinocchio’s conscience so he can remain “brave, truthful, and unselfish.” But when Pinocchio encounters a series of unsavory characters, he finds that this task is harder than it seems.

Here are some magical details surrounding the remake of the 80-year-old movie that you can get excited about.

The trailer is live!

The rebooted cinematic version of the classic 1883 children’s book by Carlo Collodio looks like a feast for the eyes. Disney recently dropped the visually stunning trailer on Twitter and it doesn’t disappoint: “The beloved classic comes to life. Stream #Pinocchio, a #DisneyPlusDay premiere, September 8 on @DisneyPlus!”

Pinocchio will premiere on Disney+.

You won’t have to go to the theaters to see the Pinocchio remake. During Disney Investors Day in December 2020, Disney announced Pinocchio will head straight to Disney+ on Sept. 8.

The movie has an all-star cast.

Not only will the film be directed by Back to the Future and Forrest Gump’s director Robert Zemeckis, but it also has an incredible cast. According to The Hollywood Reporter, here’s who you can expect to see in Pinocchio:

All the Pinocchio movies, please.

While you wait for this new film to make its way to Disney’s streaming service this fall, you can stream the original Pinocchio on Disney+ and get to know the original source material from 1940. Pinocchio fanatics can also look forward to two more adaptations of the beloved puppet. Pinocchio: A True Story was released by Lionsgate on demand and on DVD on March 22, 2022. And the highly-anticipated animated stop-motion version, directed by Oscar-winner Guillermo del Toro is headed to theaters in November and to Netflix this December. If you’re intrigued by a shift of the time period to the 1930s and a tale of imperfect fathers and sons, this one's for you:

This article was originally published on March 18, 2021