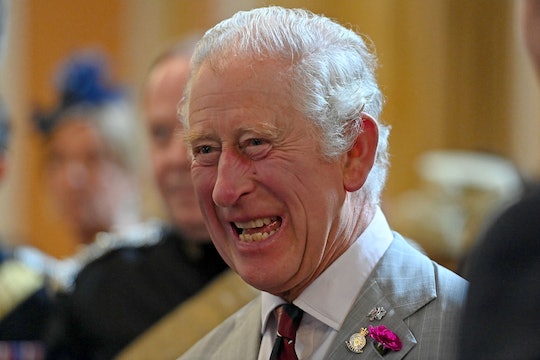 Prince Harry, Meghan Markle, and their two children’s visit to England for Queen Elizabeth’s Platinum Jubilee was very much shrouded in mystery. Especially when it came to 3-year-old Archie and 1-year-old Lilibet. Yes, we know Lilibet celebrated her first birthday there and that it was her first time visiting her father’s birth country, but what about her time with the royal family? How did they feel meeting Queen Elizabeth’s little namesake? Apparently at least one person found meeting Lilibet to be quite emotional. Her grandfather Prince Charles. What an old softie.

A royal source told People that, despite rumors to the contrary, Prince Charles and his wife Camilla Parker-Bowles were “delighted” to see his son and daughter-in-law. And especially delighted to see grandson Archie and granddaughter Lilibet. “The Prince and the Duchess [of Cornwall] were absolutely thrilled to see them," the source told People, noting that Prince Charles hadn’t seen Archie in person since the family moved away from the UK in 2020 at the latest. “It was very special to have some time with him.”

And naturally Prince Charles was excited to meet granddaughter Lilibet “Lili” Diana, who was born in California in June 2021, for the very first time. “He hadn't met Lilibet, his granddaughter, and so to meet her for the first time was very emotional — it was a wonderful thing."

While we don’t know if Prince Charles attended his granddaughter’s birthday party at Frogmore Cottage, we do know that he loves being a grandfather. At least according to Prince William. In 2019 Prince William talked about his dad for the PBS documentary Prince Charles at 70 and said he was the “the fittest man I know, but I want him to be fit until he is 95 and on. So, having more time with him at home and playing around with the grandchildren would be lovely. When he’s there, he’s brilliant but we need him there as much as possible.”

Certainly Prince Louis seemed to enjoy hanging out with his grandfather at the Platinum Jubilee. And Archie has reportedly kept a close relationship with his grandfather, who he reportedly calls “Pa.” Now that little Lilibet has met her grandfather and bonded with him, she’ll be able to hop on Zoom chats alongside her big brother. Archie can’t hog “Pa” all to himself, after all.