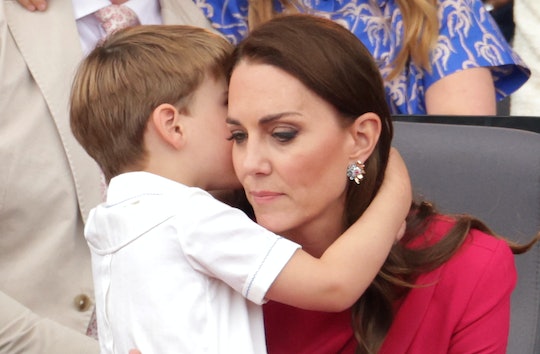 “My little Louis is just so sweet.”

Kids are delightfully unpredictable. It’s basically their one constant — just when you think you know them, they turn around and surprise you. It’s that first-smile-after-weeks-of-sleepless-nights effect. Right before you reach your breaking point as a parent, your little one does something pure and sweet that it makes the difficult times worth it. Kate Middleton has definitely had her share of challenging moments with her kids, Prince George, 9, Princess Charlotte, 7, and Prince Louis, 4, whom she shares with husband Prince William. (Who can forget those hilarious faces her youngest made during Queen Elizabeth II’s Platinum Jubilee in June?) But when the Queen died on Sept. 8, Prince Louis had the sweetest words of comfort for his mom, proving he is wise beyond his years.

During a walkabout outside Windsor Palace with Prince William, Prince Harry, and Meghan Markle on Saturday, Princess Kate told the crowd the heartfelt story about her toddler, which a witness named Banita Ranow shared with a royal reporter, per Hello! Magazine. A video of the moment was also posted on TikTok by user @magsmay1 and quickly went viral.

“My little Louis is just so sweet,” the Princess of Wales says in the video. “He said, ‘Mummy don’t worry, because she is now with great grandpa.’” He was referring, of course, to Prince Philip, the Queen’s husband and Prince Louis’ great-grandpa, who died in April 2021.

Princess Kate had the difficult job of staying behind in Windsor to watch over her children as Prince William and the rest of the family rushed to Balmoral on Thursday to say their goodbyes to the Queen, per The Daily Mail. The royal kids had just started their first day at their new school, and Middleton decided to stay behind to pick them up. It appears she was the one to break the news to the kids, which would have been incredibly challenging.

Helping your kids process grief while dealing with it yourself is not easy, which is why her story about Prince Louis’ reaction is even more precious. He knew his mom was hurting and took the time to comfort her, showing a range of emotional maturity and sensitivity that is super impressive for a 4-year-old. Especially one who went viral just three months ago for the silly faces he made when he was bored during the Platinum Jubilee. The moment was talked about so much that Prince William and Princess Kate even joked about it on Instagram, writing, “We all had an incredible time, especially Louis… 👀”

Despite his age, Prince Louis seemed close to his great grandparents, and it seems he even picked up on how much the late Queen loved her husband. At Christmas last year, the Queen noted that “one familiar laugh” was missing at their celebration, then she gave a lovely tribute to her late husband.

“That mischievous inquiring twinkle was as bright at the end as when I first set eyes on him,” she said. “But life, of course, consists of final partings as well as first meetings. And as much as I and my family miss him, I know he would want us to enjoy Christmas.”

This year for the holidays will see two bright lights missing in England, but like Prince Louis so eloquently pointed out, they will be celebrating the holidays together once again. Leave it to kids to know exactly the right thing to say to make their parents cry and smile at the same time.

More Like This
Prince Louis Is Asking His Parents Questions As He Tries To Understand Queen Elizabeth’s Death
Queen Elizabeth II's Most Romantic Quotes About Prince Philip
Queen Elizabeth's Corgis Will Be "Spoiled Rotten," According To Prince William
Kate Middleton Honored Queen Elizabeth & Princess Diana At Her Majesty's Funeral