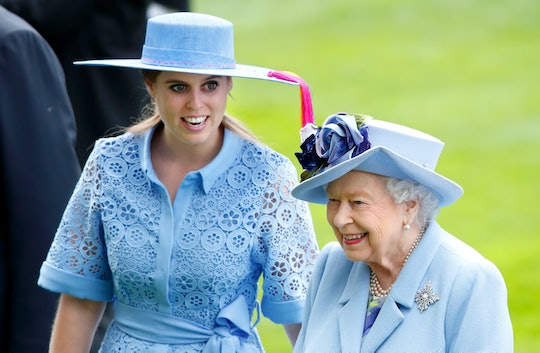 Princess Beatrice’s Baby Girl Was Named After Her Great-Grandmother

A traditional name with a modern twist.

Princess Beatrice and her husband, Edoardo Mapelli Mozzi, have released the name of their baby girl shortly after her birth on Sept. 18. While the couple went with a more modern name for their daughter’s first name, they also managed to pay tribute to Princess Beatrice’s beloved grandmother, Queen Elizabeth. Welcome to the world, Sienna Elizabeth Mapelli Mozzi!

Mapelli Mozzi and Princess Beatrice were married in a private ceremony in Windsor in July 2020, with the oldest daughter of the Duke and Duchess of York wearing her grandmother’s dress as her wedding gown. Just over a year later, they welcomed baby girl Sienna Elizabeth. Her proud dad shared the news via Instagram (Princess Beatrice does not have a social media account) with a photo of Sienna’s footprints and birthdate. “Sienna Elizabeth Mapelli Mozzi,” he wrote. “Our life together has just begun, and I can’t wait to see all the amazing things that await us.”

The new father thanked the health care professionals at Chelsea and Westminster Hospital as well as noting he is “feeling so much love and gratitude for my amazing wife, baby Sienna and Wolfie. These are the days I never want to forget. This week, a friend said to me the sweetest saying….that with every child you grow a whole new heart.”

Queen Elizabeth shared the announcement on the Royal Family Instagram with the added sweet message, “The couple have said, ‘We are all doing well and Wolfie is the best big brother to Sienna.’”

Sienna is something of an unusual name choice for the royal family, although it is becoming an increasingly popular choice for parents over the last few years. The name comes from the Italian city of Siena and also is used to describe a reddish-brown hue, giving it a sort of earthy, eclectic vibe. With baby name trends for 2022 leaning towards a connection to nature, Sienna is very on trend.

As is her middle name, Elizabeth. The younger members of the royal family have been paying tribute to Her Majesty with their babies’ names, like the Duke and Duchess of Cambridge with their 6-year-old daughter, Princess Charlotte Elizabeth Diana. The Duke and Duchess of Sussex really paid homage to her after they named their baby girl Lilibet “Lili” Diana, in tribute to Queen Elizabeth’s longtime nickname.

Sienna joins the ranks of royal great-grandchildren with non-traditional names like Savannah, Isla, Archie, and August. The times really are a-changing.