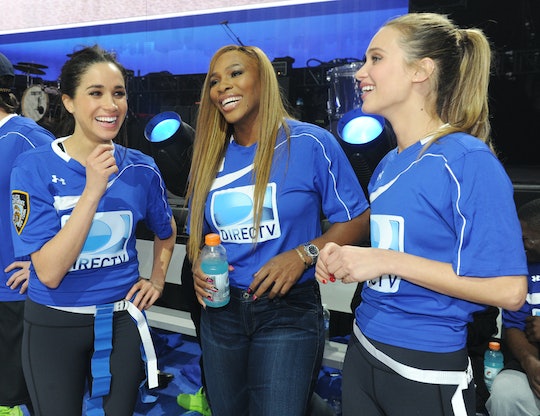 "She teaches me every day what it means to be noble."

In the wake of her friend's revelatory interview with Oprah Winfrey on Sunday, Serena Williams showed her support for Meghan Markle on social media, applauding her for "being so brave."

"Meghan Markle, my selfless friend, lives her life — and leads by example — with empathy and compassion," Williams wrote in a statement on social media after the interview aired. "She teaches me every day what it means to be truly noble. Her words illustrate the pain and cruelty she's experienced."

Markle and husband, Prince Harry, sat down with Winfrey for an interview on Sunday night where they were candid about their experience as former senior members of the royal family. The Duchess of Sussex was heartbreakingly honest about her struggles with mental health while pregnant with her son, Archie, in 2019, as well as the harsh criticism she has faced from the press.

Being so vocal about these things must have been hard for Markle, but she had the support of her longtime friend, Williams, who took to social media to address what Markle and Prince Harry told Oprah on Sunday. "We must recognize our obligation to decry malicious, unfounded gossip and tabloid journalism," she wrote. "The mental health consequences of systemic oppression and victimization are devastating, isolating, and all too often lethal."

Williams, who is a mom to a 3-year-old daughter, acknowledged that Markle is currently expecting a girl, and shared her hopes for their future. "I want Meghan's daughter, my daughter, and your daughter to live in a society that is driven by respect," she wrote.

Markle and Williams have continued to stay close friends after they first met each other in 2010. Markle has supported Williams at her tennis matches over the years, and has even served as a shoulder to cry on during tough times. "I call her, text her anytime crying, upset — she's always there," Williams told Access Hollywood in 2019. "Doesn't matter what she's going through, she just sets the time away, and she's so amazing."

But now it's Williams' turn to lend her support for Markle — and she wasn't the only celebrity to do so. Chrissy Teigen took to Twitter before the interview to defend Markle amid bullying allegations, writing that people "won't stop until she miscarries."

Williams also called for people to treat Markle, and each other, with kindness. "Keep in your memory the fruitage of the spirit is love, joy, peace, long-suffering, kindness, goodness, faith, mildness, self control," she wrote. "Against such things there is no law."