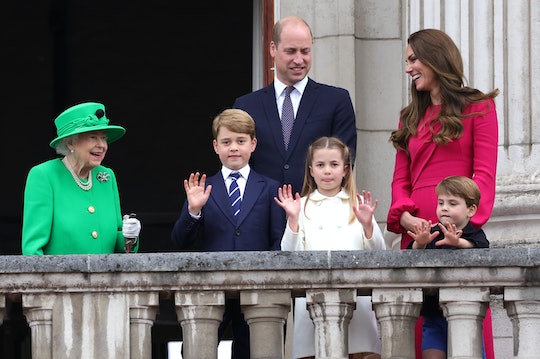 No matter what their parents decide, they’ll surely find a way to pay their respects to their dear “Gan-Gan.”

When Queen Elizabeth II is officially laid to rest on Monday, Sept. 19, her funeral will be attended by some of the most influential people on the planet. Heads of state, royals, and dignitaries from around the world are expected to attend, as will her own royal family, of course. King Charles III will be there alongside his siblings, his children... and perhaps his grandchildren? At least some of the royal children might be in attendance at their great-grandmother’s funeral to say goodbye to their “Gan-Gan,” and it will certainly be a sad day for all. Here are a few reasons they could and could not make an appearance.

A school holiday will be in effect for the whole country.

While the royal family has not yet shared whether or not the youngest of the royal children will be in attendance, there is one clue that could mean the kids at least are able to attend. The entire United Kingdom will observe a national holiday to honor Queen Elizabeth’s funeral, which means schools will be closed for the day. This could make it easier for all the royal grandchildren and great-grandchildren to attend Her Majesty’s funeral, as they’ll have the day off from school.

Prince George and Princess Charlotte have attended a memorial before.

Prince George is heir to the throne.

We all know that the royal family has a long list of rules and protocols to follow that have been embedded over centuries. It seems fairly likely that Prince George would be expected to attend Queen Elizabeth’s funeral as second in line to the throne after his father Prince William. Princess Charlotte and Prince Louis are third and fourth in line to the throne as well, but perhaps Prince Louis, at least, would be considered too young to attend such a serious event at just 4 years old.

While Prince Louis is still quite young and perhaps not ready to attend such a somber occasion, Princess Charlotte has already attended a solo royal outing with her parents. And as she was such a model royal at Queen Elizabeth’s Platinum Jubilee celebrations this summer, it certainly seems as though she would be up to the task.

Will Archie and Lilibet attend the Queen’s funeral?

The Duke and Duchess of Sussex have remained in England to honor Queen Elizabeth and attend her funeral, and there has been much debate about whether or not their own children, 3-year-old son Archie and 1-year-old daughter Lilibet, will join them. While the couple have reportedly been considering flying their children to the UK with grandmother Doria Ragland to be with them, their attendance at a funeral seems fairly unlikely. Their parents have been fiercely protective of their privacy, and such a public event would certainly change that. Plus, it could be an emotional time for Prince Harry, looking back on the sad royal funeral he attended as a child.

Prince Harry and Prince William might not want their children to experience what they went through.

Prince William and Prince Harry were just 15 and 12 years old when they attended their mother Princess Diana’s funeral, and bringing their own children to a royal funeral could bring up some difficult emotions for them. That being said, both men will want to honor their grandmother, a woman who Prince William credited as being “by my side during the saddest days of my life” in an emotional tribute.

Deciding whether or not to bring children to the funeral of a beloved family member is always a struggle, but a funeral that will be watched by millions of people around the world? I don’t envy them for this decision.