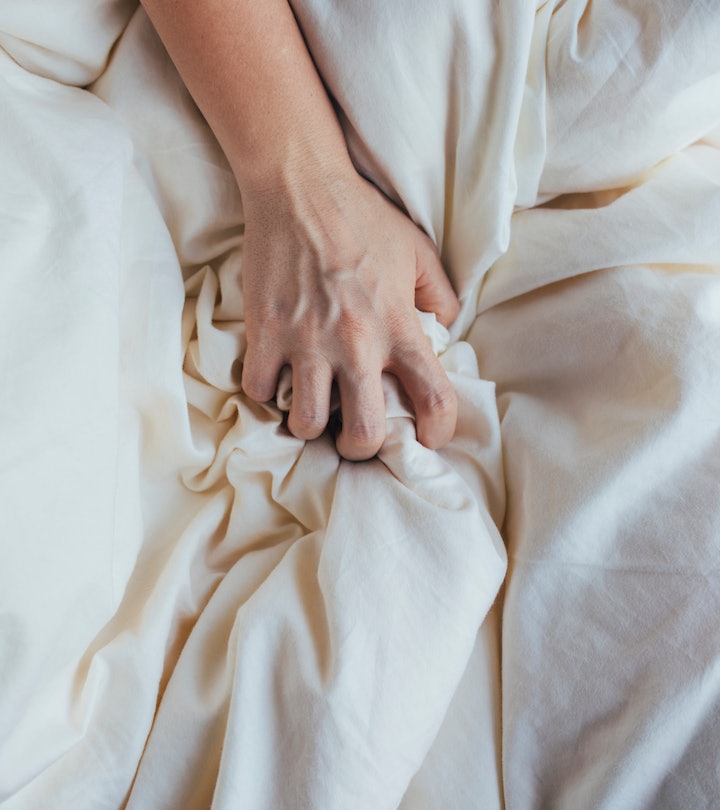 How To Know If You Orgasmed

Plus, what to do if you haven’t yet.

In the movie When Harry Met Sally, Meg Ryan demonstrates to a clueless Billy Crystal just how easy it is for someone to fake an orgasm. In the now-infamous scene, she goes on and on moaning, writhing, and generally making a lot of noise to a shocked diner audience. Movie viewers are led to believe that having an orgasm has a lot to do with screaming, but that's not exactly helpful for a person with genuine questions about how to know if you orgasmed. Thankfully, there is a way to know if you've actually hit that climax.

Why is orgasm seemingly so challenging for people with vulvas? “For one thing, people with vaginas have often gotten insufficient information to get them to orgasm in the first place, and there are many myths about it,” Carol Queen, Ph.D., sex educator and staff sexologist at Good Vibrations, tells Romper. “For another, there isn't always an obvious signal ... the way people assume an ejaculation is proof that a person with a penis has had an orgasm.” Even that isn’t 100% tru, since ejaculation can simply be a reflex response to stimulation without the peak climax. “Orgasm and ejaculation may happen together, but they are not the same thing,” says Queen.

Not only is it simpler to tell if someone with a penis has climaxed, but they can also orgasm more quickly. “​​On average, it takes men five minutes to have an orgasm, and those with a vagina ... 20 minutes,” board-certified OB/GYN Dr. Sherry Ross, M.D. tells Romper. “This is where foreplay and an uncluttered mind become the key ingredients to success and allowing yourself to have a more intense and prolonged orgasm.”

If you’re wondering how to know if you orgasmed — for real — it’s worth noting that climax doesn’t look or feel the same for everyone, so don’t sweat it if you’re unsure. But luckily, there are some cues to help you better understand whether or not you climaxed.

What Is An Orgasm?

Simply put, an orgasm is “the pleasurable peak of sexual sensation,” says Queen. It’s the physical response characterized by feelings of pleasure and the result of the release of tension during sexual stimulation. “It's generally accompanied by a buildup of — and ultimately a high level of — arousal, and frequently rhythmic pulses of the pelvic floor muscles, though if someone has weak muscles this won't feel as noticeable.”

While you feel the orgasm in your genitals, the reaction is actually taking place in your brain, notes Queen, “but because genital sensation so often leads to it (and many people are focused on the pelvic floor contractions), it's often thought of as purely a genital response.” In fact, according to a 2016 Socioaffective Neuroscience & Psychology study, in some cases it’s possible to reach orgasm purely “through thought alone.” As in, no touching necessary. The same study notes that climax can be reached by stimulation of exclusively non-genital body parts (such as kissing different parts of the body).

“It is also true for people with vaginas that many who are orgasmic can be orgasmic in different ways,” Queen tells Romper. “There are at least two separate nerve pathways from the genitals to the brain.” This means people can have “vaginal and/or G-spot orgasms, but also the much more common clitoral orgasm; but there are also those who can orgasm from nipple stimulation, spanking, and other kinds of stimulation,” says Queen, noting the small minority who can simply fantasize to get there.

While there are multiple different paths to orgasm, clitoral stimulation is the most common. “When the highly sensitive clitoris is stimulated, it becomes three times its size, and will ultimately bring you to an orgasm,” Ross explains. “During vaginal penetration, only 25% of people can achieve a vaginal orgasm. The majority of women have a clitoral orgasm only during oral and manual stimulation of the clitoris,” she continues. “With patience and practice you can learn to have a vaginal orgasm, but you usually need to have the clitoris stimulated at the same time.”

So, the question of how to know if you orgasmed isn’t necessarily straightforward since the experience is so different for everyone (and some people need not be touched at all). This makes trying to explain what it feels like a bit tricky.

Signs You're About To Climax

Typically, there are some physical signs that reveal when someone is on their way to climax. Being aroused leads to an increase in blood flow, which can cause a number of things to happen. “The nipples often get hard, genitals flush and engorge with blood, and some get a ‘sex flush’ — blood flows to the face and upper torso too, and is sometimes visible,” says Queen. “And the heart beats faster, as well.”

A change in your breathing is another indicator orgasm is on the way. This can mean breathing faster, gasping, or moaning, like you might expect — but according to Queen, many people also become quiet and still at this stage. “Sometimes partners feel you are not really aroused or haven't really come if there's no sound,” they say. You can also expect some toe-curling or sheet-grabbing — both totally legit, non-performative signs of orgasm due to muscle contractions (though not everyone experiences this, of course).

Ironically, with the building sensation of arousal, “some people experience a phase called ‘plateau’ on the way to orgasm, when the buildup seems to have gone flat,” says Queen. This doesn’t mean all hope is lost. In fact, it’s often just after this plateau that the climax will hit, so don’t give up just yet.

Physical Signs You're Having An Orgasm

This tension typically continues until the magic moment, but how can you tell if you've actually reached that peak?

The physical signs of having an orgasm happen when the muscles of the uterus, vagina, and even anus rapidly contract about once per second, and typically five to eight times during an orgasm. Your pelvic floor will pulse, and arousal will continue to climb and then peak. “The peak is the orgasm happening; and often genitals are quite sensitive,” notes Queen. “For some (not all), there is an outburst of sound too.”

After you have your big O, it’s common to feel sleepy, lovey, emotional or cuddly. But many people also remain turned on and go for multiple orgasms, while others get extremely sensitive and cannot be touched immediately afterward. Like, please-don't-even-try-to-touch-it kind of sensitive.

What To Do If You Haven't Orgasmed Yet

You can also try to locate your G-spot. “If you insert your finger into the top surface of your vagina, up to about the second knuckle, the slightly bumpy mound or ridged area you reach can be identified as the G-spot (some describe it as having the same texture as a raisin),” Ross tells Romper. “When a woman is sexually aroused, the G-spot fills with blood, giving it a swollen feeling. When properly stimulated, you may orgasm or even ejaculate.” However, Ross notes that not everyone is sexually aroused by stimulation here, so don’t be discouraged if you’ve tried and failed to locate it.

And when you’re exploring your body, just remember that part of the point is to have fun while getting there. Relaxation is key, so no need to stress yourself out while trying to have an orgasm. Keep going, and don't be afraid to ask for your partner's helping hand. “Learn as much as you can ... and above all, resist this idea that it's always the same for everyone,” Queen urges. “Explore your path to orgasm.”

This article was originally published on May 5, 2017