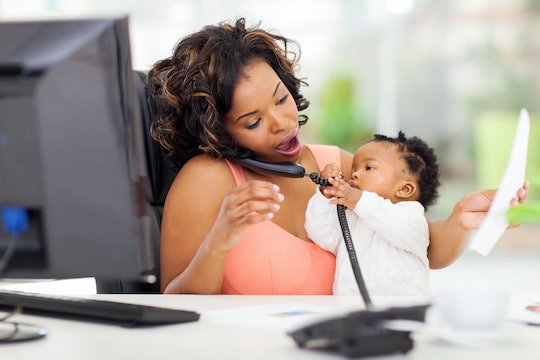 When I was a working mom, I would be on the receiving end of some unintentionally hurtful comment at least weekly. Occasionally, the comments weren't unintentionally hurtful, but obviously and willfully mean. Whether accidentally or on purpose, some of the cruelest things anyone could do to a working mom usually revolve around the idea that the role of "mom" is prescribed, "natural," narrow, and static, and working moms are flagrantly and wrongly subverting that.

Of course, thinking of motherhood as something that must be done in such a particular way for more than about 30 seconds leads to a cascade of questions whose answers ultimately lead one to the realization that "OK, there actually isn't one single way to do this and there never was and everyone is going to be fine so we can stop clutching our pearls." Sadly, too few people actually do think about it critically for more than 30 seconds, but hunker down in their preconceived notions of what's "best for children" and what mothers are "supposed to do."

I think the biggest problem working moms face when it comes to dealing with criticism, judgment, or thoughtlessness, is that not enough people are willing to put themselves in the shoes of a working parent. From the workforce itself (which, by and large is not structured in such a way to accommodate anyone interested in balancing parenthood and a job, unless you're talking about Patagonia in which case OMG are you guys hiring?!) to individuals unwilling to consider someone's situation outside of their own set of circumstances. This, unfortunately, leads to callous and sometimes cruel behavior, up to and including the following: