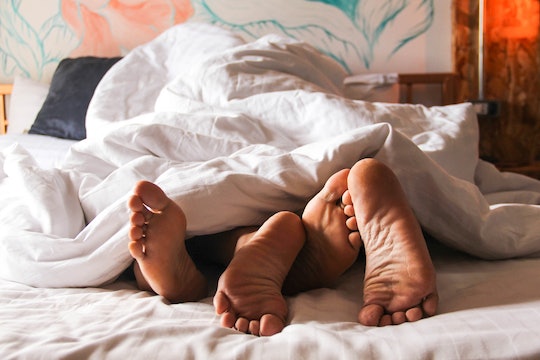 Sometimes society sucks. Take, for example, the way we view motherhood and sexuality... or how we refuse to believe there's any sort of intersection between the two. According to society, once you're a mom your sexuality is non-existent. This belief was not lost on me when I was pregnant, and as a result I was worried. Couple that with fears I had about the effects of birth and the demands of parenthood on my sex life and, well, I was really worried. But it turns out the pre-baby fears I had about postpartum sex were completely unnecessary.

Everyone is different, of course, and different couples are going to have different experiences after they welcome a baby into the world. Some of those experiences may completely suck, too, and others may take a lot of time and effort to overcome. But, for the most part, people will not only have sex again after they become parents, but they will have good sex at regular intervals again once they become parents. I mean, think about it: most people who have kids have more than one. Those second, third, and even fourth and fifth babies have to come from somewhere, and that somewhere doesn't involve a stork.

Here are some things I worried about that, it turns out, were non-issues (or were not as big a problem as I feared they might be):

More Like This
Why Does My Baby Cough While Breastfeeding? Experts Explain
In Search Of New York City's Most Luxurious Birth Experience
I’m A Newly Single Mom. How Do I Get Over My Body Insecurity?
Dr. Jill Biden Just Delivered Some Frank, But Powerful, Advice On Motherhood