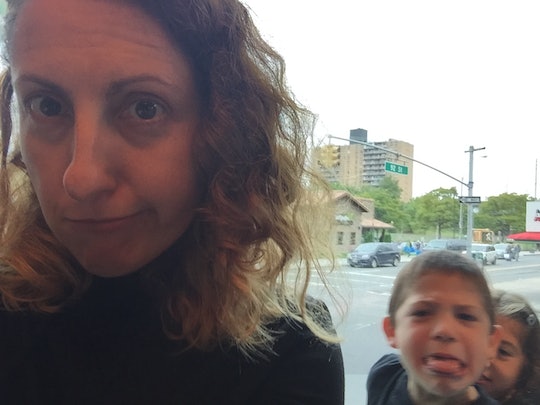 In The New Year, Don't Promise To Be A Better Mom

“I am the worst.” This is something I tell myself far too frequently, usually after I’ve snapped at my kids and regretting the way I spoke to them. In that moment I vow, like a million times before, to suck less. However, that’s not a viable solution. In fact, there are plenty of reasons why resolving to be a better mom doesn’t work. I have broken this promise practically every time I’ve made it, so I think it's time for a new strategy altogether.

I can’t resolve to just “be better.” I can, however, break down that daunting goal into small, reasonable tasks that, as they are accomplished, help me to at least feel like I’m improving my mom game. I am not able to be “better” at handling my tween daughter’s backtalk, but I can at least try to not fly off the handle in response to her disrespectful tone. Being better is such a vague and subjective, goal. My “better” doesn’t look like another mom’s “better,” so in the end, how will I ever know if anything I do is better than how I was previously performing?

My desire to be better is deep-seated. My whole life I’ve been seeking praise, and motherhood is another arena where I could try to “compete” to be the best. Luckily, a few years into the mom gig I realized how damaging that mindset was. Being a good mother took love and the truth is, there is no way I could improve in that department. I could not love my children more. I am rooting for their success. I just have to back off the idea that some level of superior parenting is the only way the kids will achieve it.

So, as we're collectively staring a new year in the face, I refuse to pledge to be a better mom. I vow to be a more patient mom. A more present mom. A mom whose love for her family extends to herself, instead.