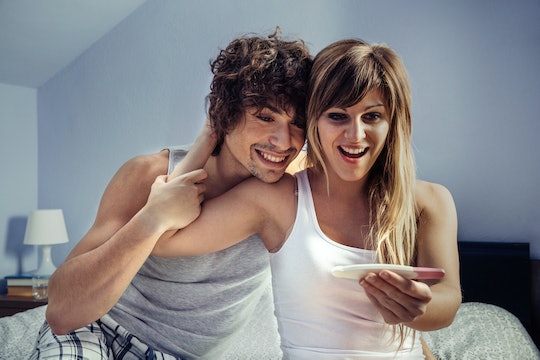 I Don't Get This Whole "Getting Pregnant" Thing

While I am anything but science minded, I understand the human body insomuch that I know where babies come from. I paid attention during that awkward middle school health class, thank you very much. Still, while I'm a grown-ass woman who knows how pregnancy happens, there are things about getting pregnant that still don't make sense to me, even three years and a baby-turned-toddler later. Hey, science can only do so much, right? There's still a shroud of mystery covering this whole knocked-up thing, and I'm not too sure I will ever fully understand all that goes into making a mini-me.

I hesitate to say I'm completely clueless, because naivety isn't cute when you're dealing with your reproductive rights and reproduction in general. So, yes. I do know that an egg is released from a woman's ovary, and that egg meets a sperm and something called "fertilization" happens. I even know that the fertilized egg implants itself into the woman's uterus, and starts to grow. I also know that sex isn't the only way a woman can become pregnant, because IVF is a pretty amazing thing and medical interventions have made it possible for all types of couples to have children. Yay science!

So, see? I know some things. The basics, if you will. I also know what occurs during pregnancy, labor, and delivery; and not just what's in textbooks but what you can only learn from experiencing it yourself. Still, after 40 week of pregnancy and more than two years of motherhood, there are a few things about getting pregnant that I just cannot wrap my mind around. Things like, for example, the following: