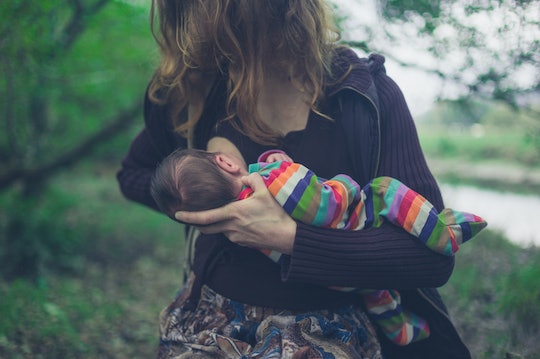 What I Didn't Know Would Happen When I Nursed

Before I had a baby, I had a vague concept of breastfeeding. I wasn't sure I'd be successful at it, because so many people had told me how hard it could be. I didn't know a lot of other moms my age at the time, nor had anyone in my family breastfed when I was growing up, so there wasn't much in the way of hands-on information. In other words, I got a real crash course when it came to nursing my first born and there were so many things I didn't realize happened when breastfeeding.

For example, and I know this is going to sound really silly to people who have had kids, but I had no idea that babies didn't do things by the book. In my birthing class, we had learned about what a nursing session typically looks like, but there was little mention about variability or the fact that some babies don't adhere to a sleep or nursing schedule at all. Curse that birth instructor for not telling it like it is. Also? I hadn't realized that it would feel as weird as it did to have milk in my body. You guys. It feels really, really weird. Kind of up there with the whole carrying a moving, punching, kicking little person inside of you. Some of the other things I didn't realize had to do with other people's reactions or behaviors around my breastfeeding. Again, I wasn't prepared.

To all you ladies out there for whom breastfeeding might be on the horizon, read on to find out other things I didn't realize about breastfeeding. It is not too late for you to be in-the-know.