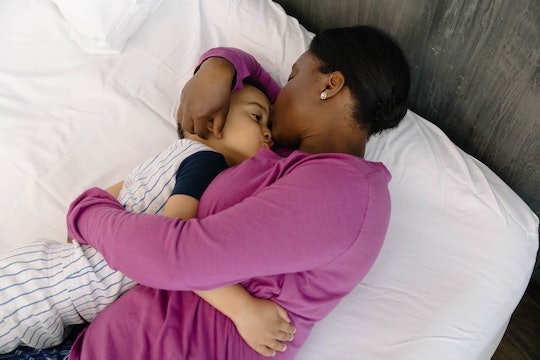 When my daughter was around six months old, we tried sleep training her using the cry it out method. I honestly have very little recollection of that period, probably because it was so traumatizing. There was so much crying, from her and from me. I'm guessing it worked, but there were times she ended up in our bed, too, usually because she wouldn’t settle down and I didn't have the stamina to either soothe her or let her cry. As I’d stare at her peaceful, slumbering face, I’d imagine all the things things I wished she would tell me when co-sleeping. I needed the reassurance in those moments, when I thought I’d never sleep again, that we’d all be OK.

I didn’t intend to co-sleep with my children, but it happened, and I had the bruises from little wayward kicks to prove it. That inevitable and unexpected shift in sleeping plans made bedtime, well, kind of odd. During these weird nights, when a small child would invade the tranquil haven of our bed, I’d often wonder, “What the hell are they thinking?” That was a rhetorical question, of course, but not the only time I wanted to know what was going on in their little minds. I’m sure if my babies could have spoken to me, they’d have some choice words, especially in response to the ridiculous Halloween costumes I chose for them when they were pre-verbal. (I dressed my infant son as a bedbug one year, complete with fake insects attached to his baby blanket. We got some stares.)

So when I was co-sleeping with my little ones years ago, here are some things I wished they could have said to me. If only they weren't so selfish and incapable of speech at the time, right? Jeez. Kids.

More Like This
Even If Your Baby Sleeps Better in Your Bed, It’s Still Not Recommended
What To Do If Your Toddler Keeps Taking Off Their Diaper At Night
Paris Hilton Is Officially A First-Time Mom
When Does A Baby Recognize Their Father? A Pediatrician Explains
What Parents Are Talking About — Delivered Straight To Your Inbox