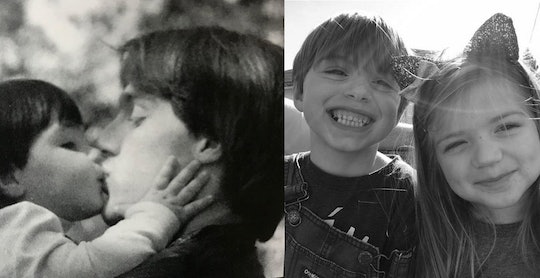 10 Things I Wish You Could Know, Even Though You're Gone

When I was almost 3 years old, my father died. He was 21. Growing up in the shadow of his death has been one of the most significant facts of my life — if I were a comic book superhero, this would be a crucial detail in my origin story. The logistics of what his absence has meant over time have changed, but the absence itself has never diminished. In a way, it has always been a presence, palpable and intrinsically understood. And now that I'm a mother, there are things I want the grandfather my children will never meet to know, or that I wish he could know. Whether he knows or doesn't know anything, at this point, is something I can't really comprehend or know how to consider (or don't want to, or consider in a way that doesn't generally sync up with how I think about most other things).

When I thought about writing this article, I didn't consciously realize that the 32nd anniversary of his death was only days away. I also didn't realize that I would be memorializing my most dearly departed on Dia de los Muertos. It's almost too appropriate. But, then again, it also seems perfectly fitting. My father's family has always been deeply concerned with legacy and memory: we have kept certain family names and stories for centuries now. Job Bowers, Revolutionary War soldier, murdered by Tories while on furlough for the birth of his son. William Bowers, one of two men in the state of Georgia to vote for Lincoln in 1860, almost lynched for his opposition to the Civil War.

Brian Bowers, my father. He only had 21 years to secure his legacy and I'm part of it. So, too, are his grandchildren, even though they'll never meet. Reflecting on my father through their existence, and as a parent myself now, makes me think about everything I wish he knew about what he left behind. Things like the following:

More Like This
4 Moms Of Color On The Beauty Traditions They’ll Never Pass Down
Here’s How To Keep Your Baby Safe When Their Older Sibling Is Sick
20 Toys You Don’t Want To Miss From Amazon’s Top Toys List Of 2022
Can Elderberry Help Prevent Illness In Kids? Doctors Weigh In