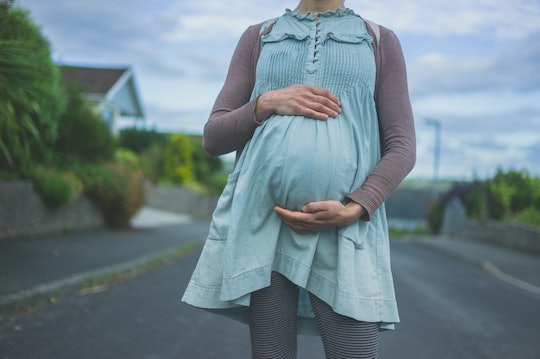 There's no number to articulate the amount of times I've been naive or flat-out wrong. Seriously, that number is infinite and knows no bounds. However, one moment of complete childishness, in my opinion, was my assumption that I wouldn't have to deal with street harassment when I was pregnant. I honestly thought to myself, "Well, our culture doesn't really think women who take up space or have curves are particularly attractive, so I'll be safe." I was wrong. The things men actually said to me on the street when I was pregnant was a stark reminder that street harassment has nothing to do with how you look, and everything to do with how society thinks it can (and as a result, does) treat women.

I was catcalled when I walked my pregnant body to the doctor; harassed when I went out for a walk a day before my due-date; yelled at by a group of men when I was shopping for baby supplies at a local store. In no way did a protruding baby bump protect me from street harassment, and why would it? Thanks to a prevailing rape culture and other dangerous messages cisgender, hetero men hear on a regular basis, women who do something as simple as walk on a sidewalk are subjected to unwanted comments (or worse). Our society has created an environment in which certain men feel entitled to women's bodies — and that entitlement can and usually does manifest itself into either comments packaged as "compliments," domestic violence, or sexual assault — and whatever a woman's body is going through, including pregnancy, doesn't keep some men from treating women like sexual objects.

I found out I was having a boy fairly early on in my pregnancy, so walking around with a son in my womb while men were yelling obscenities, crude remarks, and other harassments my way, was nothing short of eye-opening. I vowed to raise a son who wouldn't do what so many men seems completely comfortable doing. When my son grows up and sees a pregnant woman, he will offer her his seat on a train or hold open a door. One thing is for certain; he will never, ever, say the following: