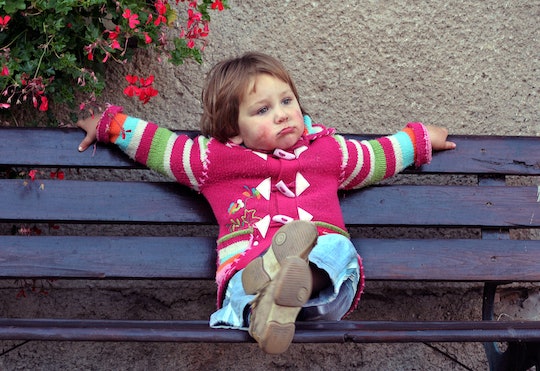 10 Things Parents Of Defiant Kids Are Tired Of Hearing

When I found out I was pregnant I tried to envision what my future son or daughter would be like. I'd spend time thinking about who I am and thinking about who my partner is and wondering what parts of both of us would end up making this entirely new, wonderfully unique human being. Yeah, my imagination at its absolute best couldn't have thought up my son. He's wild, smart, intuitive, so sweet, adventurous and, well, defiant. So, I've heard all the things parents with defiant kids are tired of hearing, as it seems to be nothing more than "occupational hazard," at this point.

For the most part, I don't mind. Unlike the random passerby at the park or even my closest friends and family members, I truly know who my son is. I spend the most time with him; I see him at all hours of the day and I've experienced all the phases he's experienced, to date; I know his heart and why he acts the way he acts. I know that while he may look like a wild man with no manners and an affinity for throwing toys across the room, he's actually teething and somewhat exhausted and upset because the one toy he really wants, is the one toy we can't seem to find. I know that if he is not listening to a well-placed "no," it's because he doesn't understand why someone is saying "no," and if I want him to listen, I need to do a better job of explaining.

Then again, I know when my son is simply being a toddler throwing a toddler tantrum, which doesn't make his perceived defiance anything more than a normal toddler reaction to a world that's overwhelming and "unfair." So, when people raise their eyebrows at my son simply being a kid, I can't help but chuckle because, well, we've all been there. Literally, everyone and every kid has thrown a fit because they aren't getting what they want. So, between knowing my son and knowing he's just a toddler, I would be pretty happy if I never heard the following things again. Yes, even if you think my son is being "defiant."