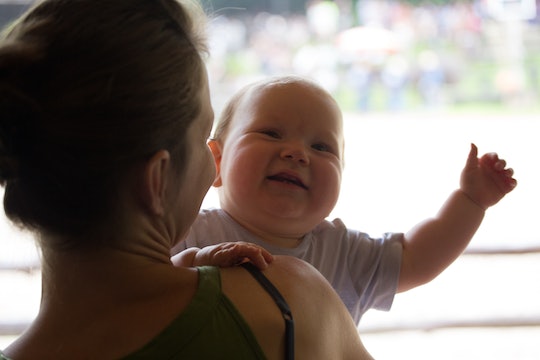 The very mention of "sleep regression" is enough to strike fear in the hearts of new (and even seasoned) parents everywhere. Just when we thought it was safe to embrace sleep again, and function like regular human beings, a dreaded setback rears it’s ugly head and reminds us all who is really the boss. Because going back between sleep and insomnia is the absolute worst, there are definitely some things every mother thinks during sleep regression. I mean, it's intense. You likely feel desperate and frustrated, and also slightly conflicted because your child is so adorable in their pajamas, even in the middle of the night, so how can you be mad, really?

Turns out, there are multiple sleep regression cycles that any parent should at least attempt to be prepared for. While every kid is different, you can at least slightly assume that you'll go back to waking up every two hours (or less) when your kid hits 4 months, 8 months (or 9 months or 10 months) and 12 months. That's not, of course, including growth spurts, which is an entirely different monster that, when dealing with sleep regressions, you don't even want to think about. Trust me.

If nothing else (because there's really not much else you can do) know that you’re not alone when it comes to dealing with sleep regressions. It may feel like you are, especially when you’re watching the sun come up with your kid for the third day in a row, but you are now part of an elite circle of parents who’ve been there and done that and survived (yes, you will survive). If you're thinking the following, I can almost guarantee you that there's another parent, dealing with their kid's sleep regression, thinking it, too.