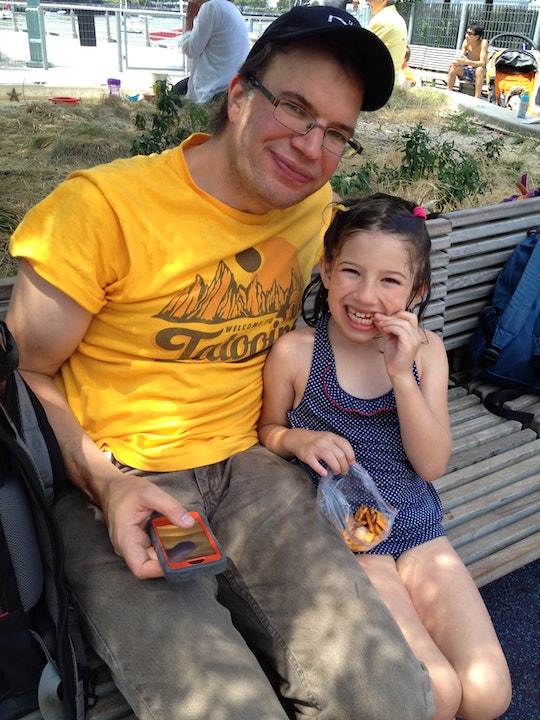 Why Are We Worshiping Working Dads, Again?

Shortly after our first child was born, my husband left his staff job and went freelance. His more flexible schedule allowed him to spend a lot of daytime hours with our daughter, and he was often the only adult male amidst the throng of toddlers and their caregivers at the playground most mornings. He was also often the only caregiver on the receiving end of approving looks from the surrounding moms and nannies. It was lovely, but how was it justified to worship what a working dad does that a working mom does, without the same positive feedback? He was just parenting: watching our daughter, catching her on the slide, pushing her on the swing, buckling her into the stroller despite her protests. When I would do those same things, nobody took notice.

Being a “working dad” wasn’t really a thing before now. Dads worked, of course, but they weren’t expected to demonstrate any interest in or responsibility towards being someone’s parent. A generation ago, dads went to work and didn’t have to think about kids because their female partners were home taking care of that.

However, more mothers are in the workforce now, juggling kid stuff and job stuff, and trying to rise to the impossible standard of “having it all.” The upside is that society is expecting dads to be a lot more involved with day-to-day parenting, because there is no one to hand it off to anymore. The downside is that with their new “working dad” labels, they’re bogarting all the praise that working moms could be getting for doing the same damn things.

We have to stop believing the hype that dads with jobs are really going the distance to be hands-on parents as well, especially when their female counterparts are expected to do both and as part of their genetic programming as women. Being a working parent is a challenge, no matter if your kid calls you “Mom” or “Dad.” But let’s not undervalue my efforts as a working mom by directing all the praise to a working dad who, if anything, maybe doesn’t deserve much praise at all, seeing as how his body was never used as a vessel to grow and nurture an actual human being.