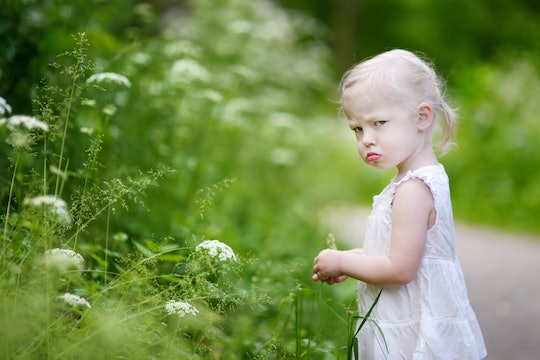 I'll never forget the first time my son said "I love you," unprompted and for no reason. We were sitting on the couch, having just had dinner as a family, when he came up to me, put his little hands on both my cheeks and said, "Mama, I love you." I almost died; I definitely cried; I instantly gave my son what had to be the longest, strongest hug I've ever given anyone. However, my son is a two-year-old toddler who is as defiant as he is sweet, so there are moments when I question if my kid loves me at all. I mean, he can say "I love you" in that sweet little voice all he wants, but his throwing and hitting and ambivalence to my presence, at times, says otherwise.

Yes, rationally I know that my son loves me and him acting out is simply him acting out. I know that his toddler brain is still developing, and that can make the world a frustrating, confusing, overwhelming and scary place. I know that he gets wrapped up in his little world of toys and books and games and, in those moments, I don't seem all that important. I know that my son gaining more independence and refusing my help doesn't mean he doesn't care about me, but that I'm actually doing my job and he is becoming the person he is meant to be. You guys, I know all these things, but my feelings get in the way of reality and, well, I can't help but feel like my kid doesn't love me at all. I mean, he does, but ugh. When he's throwing fits and doesn't even care that I'm not around, emotions take over and I lose all perspective.

Motherhood is an emotional rollercoaster of masochism. You love this tiny person so much that you're willing to be completely vulnerable; vulnerable in a way you actively avoided through most of your young adult and adult life. You are willing to put yourself out there for your kid; you're willing to let them hurt your feelings; you're willing to put up with more than you possibly would take from anyone else, because you love them. So, if you find yourself in the trenches of the following situations wondering if your kid about you at all, know that they do. They just, you know, don't do the best job of showing it, sometimes.