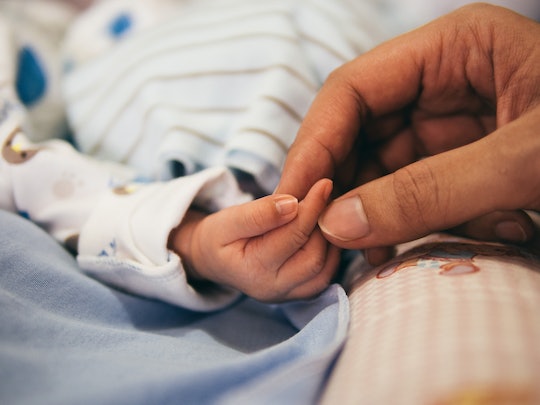 The first time I was home alone with my son was slightly stressful. By “slightly,” of course, I mean “off the charts.” He was a 2-day-old newborn and his dad ran out to the drugstore to get something that we hoped would soothe his crying (I don’t even remember what). I vividly remember walking by the hallway mirror, seeing the image of myself holding a crying baby and thinking, “Whoa.” I suspect (read: hope) I’m not alone, and that there are some universal things new moms think when they’re alone with their baby for the first time.

I was pacing, rocking, and singing old summer camp songs to my son as we kept passing by that damn mirror. At that point, we barely knew each other, but I took my new mom responsibilities seriously and was desperate to calm him in any way that I could. The only problem was that, well, I had no idea what I was doing. To be fair, I'm pretty positive my baby had no idea what he was doing, either. In some small way, and even though I was the adult in the situation, it was a small comfort to know that we were both figuring this mom-takes-care-of-baby thing, together.

Eventually, and thankfully, we figured it out. Not that night, and not that week or even that month, but at some point in the future it stopped being stressful and started feeling natural (with plenty of stressful moments in the mix, but whatever). So if you're starring that first solo mom/baby day, remember that you'll figure it out, it'll soon feel nothing short of second nature, and if you start thinking the following, you're definitely not alone.