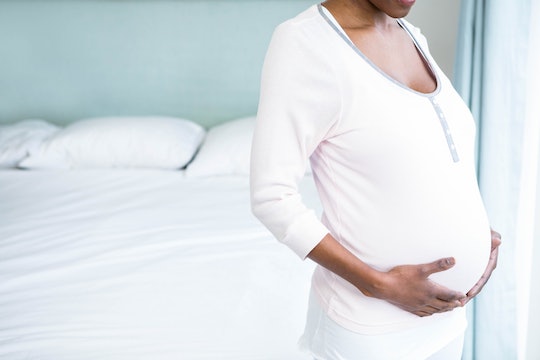 13 Thoughts Every Pregnant Woman Has During Thanksgiving

Thanksgiving is a cozy little food coma haven, meant to sustain you during months of darkness. But when you're pregnant, especially for the first time, every single aspect of your life, including this most festive and gluttonous of days, change. Hormones are flooding your brain and ever-expanding body, making for a holiday experience you haven't had before. There are thoughts every pregnant woman has during Thanksgiving, not to mention feels. Literally all of the feels. When you mix pregnancy hormones with that much food and extended family dynamics, it gets real really fast.

Don't get me wrong, a pregnant Thanksgiving can be completely amazing. You know when Willy Wonka let all the kids in the chocolate factory and started singing "Pure Imagination?" It's like that, only with turkey and a truckload of carbs. It can also be, ummm, let's say "challenging," because it's less intimidating than saying, "actual hell on Earth that will make you pray your entire family is captured by a league of super villains, strapped to a rocket, and sent to the moon."

If this is your first pregnant Thanksgiving, a few words of advice: get ready to be at least a center of attention, for better or for worse (no one can resist talking to a pregnant chick about being pregnant); be prepared to hear the phrase, "Eating for two;" if your family is particularly difficult, find a Thanksgiving buddy to ally with, because your ability to deal with other people's crap is going to be way, way lower than in previous years. In other words, having backup is clutch. And, of course, be prepared to think the following: