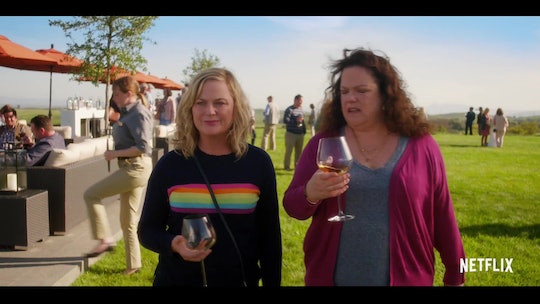 20 Netflix Movies That Go Better With Wine Than Popcorn

By a show of hands, who here would rather be home watching Netflix than go out and be forced to (a) talk to other people and (b) wear pants. Ah yes, that's what I thought: everyone's hands are raised. To that end, this list of movies to watch on Netflix while drinking wine will make you laugh and cry, but hopefully you can do both without spilling your wine. Let's face it, once you become a parent your idea of fun changes and at the end of the day there's not much that sounds better than curling up in bed and letting Netflix do all the hard work. And what's even better than Netflix? Netflix and chill(ed) wine, of course!

As a former Cinema Studies major (yup, that's a thing), I take my movie recommendations very seriously. The 20 movies below (all of which are streaming right now on Netflix), fall into several categories. From drama to comedy, documentary to thriller, they vary in genre, but remain unified by one important quality: You'll love them all even more if you are partaking in the nectar of the goddesses (a.k.a wine) while you're watching them.

So whether you're having a moms' night, date night, or relishing in some alone time, streaming one of these movies is the perfect pairing to go along with your vino. Snacks not included, but definitely recommended.