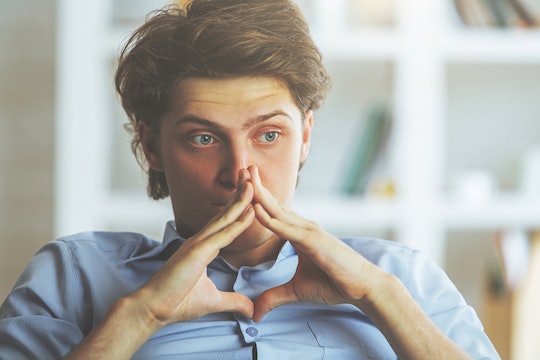 Visiting the OB-GYN is something most cis-women start doing during their teen years. In my experience, that meant by the time I reached adulthood, I felt like I could ask my OB-GYN pretty much anything. It never really occurred to me that men wouldn't feel equally open and forthcoming with their partner's doctor about the mysteries of obstetrics and gynecology. Then, I asked my husband, and it turned out, he had questions, but didn't feel right asking, considering I was their patient. When I asked other men, I found out that they, too, had questions they want to ask OB-GYNs, which I have to admit was kind of surprising, considering most men I know are loathe to admit they don't know everything.

It turns out that if given the opportunity, many guys would ask OB-GYNs questions about sex. Others also want to know about their partners' (and daughters') health — like what exactly goes on during an annual visit to the gynecologist, and how periods work — and also things like what inspired OB-GYNs to pursue a career in reproductive medicine, and what it's like to catch babies for a living. Some sweetly wondered how they could best support their partners through the ups and downs of their monthly cycle and the challenges of pregnancy, childbirth, and postpartum recovery. Others, well, they had no questions — at least none they would admit to in public.

To hear some of the burning questions men have for OB-GYNs, ranging from "found on Google" to really freaking good questions, and some that might make you shake your head, read on:

More Like This
How To Tell If Someone Is Lying To You: 34 Signs To Watch For
How To Support A NICU Parent, From Moms Who’ve Been There
6 Sex Positions To Reduce Leg Pain
Are You Leaking Amniotic Fluid Or Is It Normal Discharge? Experts Explain