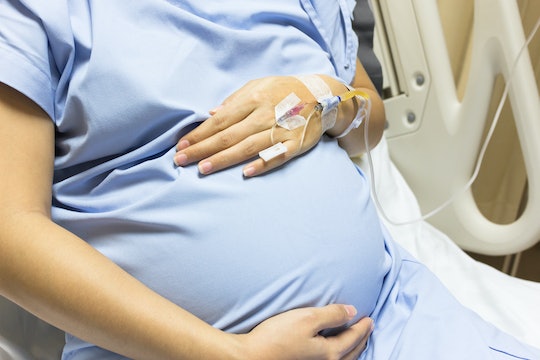 I can't tell you I had a particularly rigid birth plan. I knew who I wanted in the labor and delivery room with me; I knew that I wanted (and needed) to birth in a hospital; I knew I wanted my son to enter the world safe and healthy. Beyond that, I wasn't too concerned about my "birth experience." I did decide to try my hand at a drug-free birth, but that plan changed out of necessity and — as a result — I was made privy to the total mindf*ck double standards society has about epidurals. I mean, sh*t got real, you guys.

Of course, I'm not stranger to double standards. As a woman I've been told "real women have curves" while also being told I'm too fat. I've been told to always appear attractive but never act like I'm trying to appear attractive. I've been told to act "more like a man" but don't appear "masculine." I mean, you can't win. However, I didn't realize that the double standards were going to extend so heavily into motherhood, and even during labor and delivery. It was, for lack of a better word, intense. More intense than the 10 hours of labor I spent laboring without any kind of medications whatsoever. More intense than the act of giving birth to a baby who was alive, and a baby who wasn't; a complication that made my birth the painful experience that it was, and made an epidural so vital (for me). Yes, more intense than birth itself was hearing all the juxtaposing comments about epidurals and the choices I made when I was in the throes of labor.

It's arguably the worst part about motherhood itself. It's not the late nights and the lack of sleep and the poop (oh, so much poop). It's the hypocritical messages you're constantly bombarded with. It's the never-ending feeling of always failing, because you're always going to be doing something that someone else disagrees with. I mean, it's exhausting. So, I guess the best thing to do is just be aware of the following double standards, do what's best for you and your baby and your family and your unique situation, and f*ck the rest.