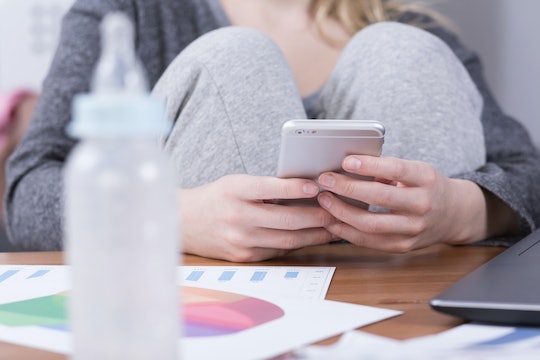 I'd like to think that I pay pretty close attention to my son, especially when I'm around him. I take him to the playground and keep a watchful eye, even if it's from a distance. I will answer a work email or check my social media feeds on my phone when I'm around him, but I make sure that I look up from time to time. Still, there are situations people assume a mom isn't watching her kids, and I've been in plenty of those situations and felt the judgmental looks that usually come along with them.

It's such a strange time to be a mother, in general. On the one hand, social media provides mothers with so many helpful communities and outlets. I can share photos of my kid with my mother on the opposite end of the country, ask my mom-friends specific questions and even find sales on kids' toys. It's awesome. On the other hand, the "mommy wars" are seemingly never-ending and mothers are constantly being shamed for their choices (or lack thereof). I didn't realize that so many people cared about what I did, or didn't do, until I had a child and decided to breastfeed in public or get an epidural during labor and delivery or co-sleep or, yes, check my phone when my son is playing at the playground.

So many people (both with children and without children) perceive danger when there really is none. More children are put at risk when they're strapped into a car, for example, than when they're granted the freedom to walk to the park by themselves. Still, certain people like to make quick assumptions and sweeping judgments and, well, the following situations usually end with someone thinking a mom isn'g paying enough attention to her kid. (Hint: she probably is, so don't worry.)