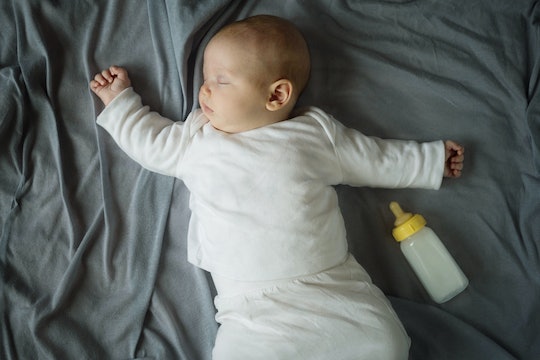 8 Things That Don’t Actually Happen When You Formula-Feed

When I first met my daughter, feeding her definitely caused the most anxiety. Six hours prior to holding her, my partner and I found out she was joining our family by adoption, so I was so excited about seeing her I didn't give feeding her a second thought. When the nurse broke out a bottle for her scheduled feed I definitely wanted in, but I pretty surprised when I realized the things everyone thinks happen the first time you formula-feed a baby, well, don't actually happen at all.

First, my daughter didn't really know what to do with the bottle. Second, it seemed enormous compared to the rest of her tiny body, even though it was a newborn pre-mixed bottle. And third, I had to hold her little chin up to help her get enough suction to feed. It was so much more work to get her to drink two ounces of formula than I ever imagined it would be. Of course, that first feeding was just a taste of what the newt few months in the trenches of newborn life had in store for me.

I'm sure other formula-fed babies take to their bottles faster, but I know my daughter wasn't the only baby in the history of babies to be disinterested in bottles and slow to learn how to make them work for her. If you're heading into bottle-feeding soon, here are a few things that don't actually happen when you're starting out. Don't worry, though; you and baby will get there with a little patience.