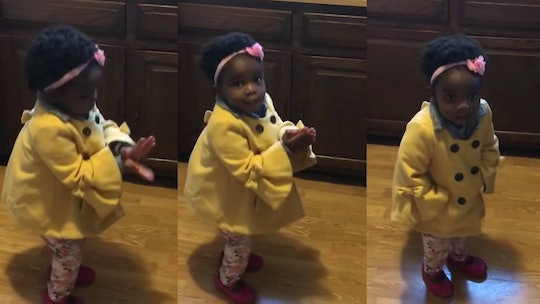 OK, 2018 has been a long year. But amidst all the bad news out there, there's been plenty of hilarious and heartwarming parenting moments online to help keep the internet balanced. And now that 2018 is drawing to a close, it seems like the perfect time to go over some of the most memorable viral parenting moments from 2018.

If I really wanted to, I could probably dedicate this entire article to the KarJenner sisters. Pretty much everything those women do regarding their pregnancies and their babies goes viral — and this year, three of them had children. Kim Kardashian welcomed Chicago via surrogate in January; Kylie Jenner gave birth to her first daughter, Stormi, in February; and Khloé Kardashian also welcomed her first child in April, a baby girl named True. Not only did the KarJenner family grow by three, but the family's fame factor continued to grow, too. (I mean, it does every year, am I right?)

Beside all the viral celebrity parenting moments, plenty of non-famous people and their kids went viral this year, too. Yes, the first item on the list is that toddler who got in a fight with her Amazon Alexa because she wouldn't play "Baby Shark."

So without further ado, here are eight of the most memorable viral parenting moments of 2018.