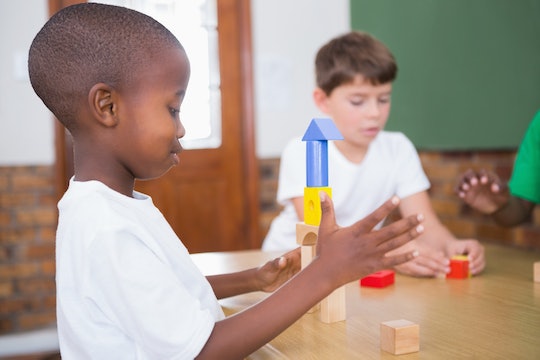 9 Creepy Things Kids Do To Their Toys, Because Playtime Gets Weird

My daughter's favorite activity has always been undressing her dolls and playing with them sans clothes. It took me a long time to wrap my head around this concept, but the conclusion I've come to is that nudity is the great equalizer. A Barbie™ without fashionable clothing is just another plastic toy with hair, not dissimilar to her (my old) My Little Ponies™, who are also plastic with hair. A Cabbage Patch Kid™ without clothes isn't that different from her favorite stuffed monkey, either. When she lines up her dolls to play "school," a naked baby and a bunny rabbit are on equal footing. My daughter is clearly a social rights activist in the making, fighting stigmas and being body positive and combating the idea that nakedness is inherently "weird." Or, you know, she's just playing. Either way, I'm proud.

Of course, there's also the times when she sucks on the corner of her security blanket, after sticking it down her shirt for the afternoon, so perhaps we're putting the cart before the horse. Kids are weird, alright? In fact, I'd argue that they're even weirder when it comes to how they play with their toys. Don't believe me? Well, here are nine creepy things kids to do their toys (that I really wish they didn't):