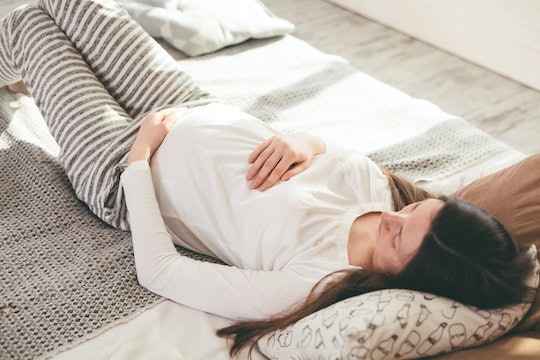 I'll just come right out and say it: bed rest is the worst. I mean, who wants to lay around in bed all day, for weeks on end? I know it sounds magical at first, but I assure you it's not. Not even close. After all, bed rest isn't a sign things are "fine" with your pregnancy. You’re put on bed rest because you have high blood pressure, cervical effacement, vaginal bleeding, or preterm labor. In other words, you're stressed, and thanks to the stress you’ll probably have fights with your partner while you’re on bedrest. Because, you know, they’re there and you’ve gotta fight with someone, right?

My second pregnancy was labeled high-risk after we lost our first daughter to prematurity. I had my cervix checked on a weekly basis (which is about as fun as it sounds, for the record) so my doctors could make sure it wasn't shortening before it should. Sure enough, at around 21 weeks (which was around the same gestation that I lost my previous baby), my cervix began to shorten to a size that was nothing short of worrisome. I was taken to the hospital for an emergency cerclage, and placed on bed rest immediately after.

My husband was fairly patient, but even on our best days our relationship felt somewhat strained. We struggled to keep from snapping at each other, especially since the reality of my second pregnancy was inescapable. We’re in a much better place as a couple these days, especially now that our son is a happy, vibrant, healthy 3-year-old, but we put in the work to get where we are now. So if you’re on bed rest right now and your relationship is suffering for it, know that it's absolutely possible for you and your partner to rebound. In the meantime, find some solace in the fact that if you're having the following arguments with your partner, you're not alone: