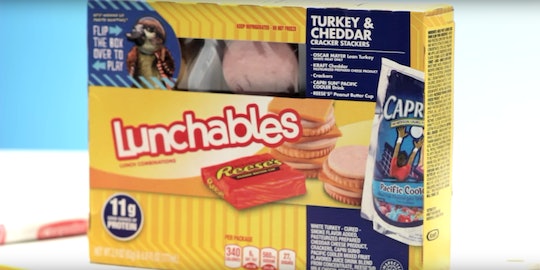 Back in the day, we didn’t really think much about nutrition. Well, at least I didn't. I was too preoccupied with cable television and AOL and MTV's TRL. And my parents seemed too tired and too busy working to give my lunches all that much thought. It’s not that they didn’t care, of course, it's just that they didn’t realize that so many companies were duping them into buying school lunches they thought were healthy... but totally weren’t. My parents didn't have a constant stream of information at their fingertips, like I do now that I'm a mom. And nutritional labels were just starting to become a thing, so no one really understood how to read them. Most folks, or at least my parents, just ate what they wanted to eat. It was a simpler time, though certainly not necessarily a healthier one.

As a kid, I recall having what I now know was one of the most unhealthy diets of all time. My lunches usually consisted of a box of Lunchables (usually the pizza variety, since ham and turkey weren’t my thing) or a bag of chips (like Doritos or Cheetos), plus a Handi-Snack (for... protein?), a juice (maybe a Capri Sun or a Squeeze-It). And the piece de resistance? You guessed it: a Little Debbie zebra cake.

Honestly, it’s a miracle I made it past elementary school eating the way I did. My mother was an immigrant from Central America though, and she didn't have these types of convenience foods where she previously lived. So, she indulged by letting me indulge. So with that in mind, ready to go down school cafeteria memory lane?