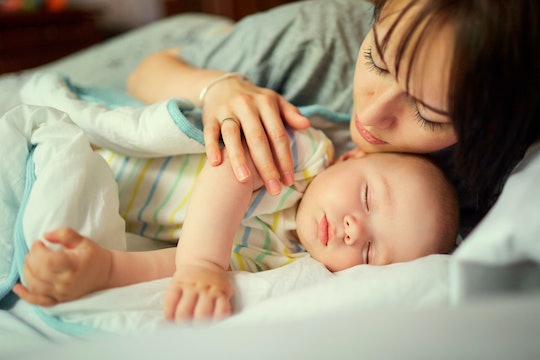 9 Things You Learn About Your Baby When You Co-Sleep

The best, arguably most fun part of being a parent is learning about this new person you've created. As you spend time with them throughout the day, you get to see how they handle a wide range of ordinary, every-day scenarios; revealing their personalities little by little and as they evolve. If you co-sleep or bed-share with your baby, you get an extra few hours of careful observation (even if you're half-asleep for some or most of it), which I personally find to be pretty cool. In other words, there are lots of things you learn about your baby when you co-sleep.

I'm one of those moms who read up on the various sleeping options before giving birth, but planned to co-sleep with a sidecar attachment for a little while before moving our baby to a crib in his own room. (Isn't it hilarious how many assumptions you make about your life as a parent, before your kid arrives? Like the child doesn't get to cast a vote?) Of course, when he got here, I quickly learned that he had other ideas and a very steadfast plan of his own. I also learned that I value sleep over winning a battle of wills with an infant, so that was that and my carefully crafted plan went out the proverbial window.