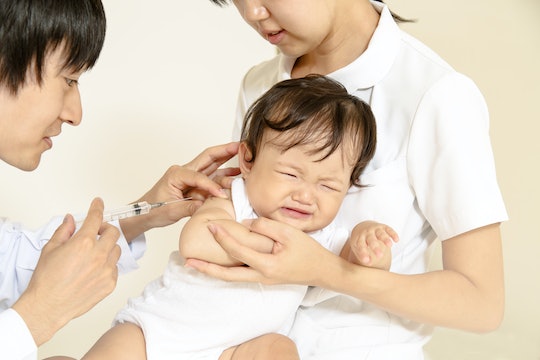 9 Things Your Baby Wants You To Know About Vaccines

The first "test" I felt I was given as a mother, was handed to me during my son's first set of vaccinations. He was 2 months old and I was inconsolable. I knew that the shots were necessary and I didn't have a single doubt in my mind that I was going the right thing; I just also wanted to punch my doctor in the face and take my son home immediately. I'm sure it would have helped to know the things your baby wants you to know about vaccines; things that can assure you those vaccines are more than worth it; things that, essentially, remind you that it's harder on you than it is on your baby.

It's difficult to watch your child confused or in even a small amount of pain for any length of time. It's difficult to know your child is experiencing even mild discomfort, essentially, because of you and a decision you've made for them. I'll never forget looking at my son and comforting him while he was receiving his immunizations; telling him that mom was here while he looked at me like, "Um, what in the hell is going on?" I was being gutted. I was also experiencing what it really means to be a mother: doing something extremely difficult because it will and does keep my child safe. I was making a sacrifice and putting myself through emotional hell because I want my child to stay healthy and safe and happy. If that's not a living example of all motherhood entails, I don't know what is.

In the end, sometimes the best thing you can do for your kid isn't always the easiest thing to do. I hated going to the pediatrician's office knowing that shots were in order. However, I also loved knowing that I was doing what was necessary to keep my son safe from things that I can't fight against, myself. My child was too young to articulate his thoughts at the moment — or even realize what was going on and why vaccinations are so important — but I would like to think that if he could have, he would have told me the following things: