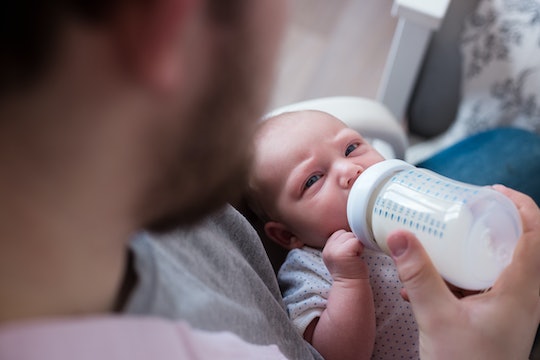 9 Ways A Loving, Supportive Partner Helps A Mom Get Over Her Breastfeeding Guilt

I always planned to breastfeed exclusively, but after my baby was born those plans went right out the window. I felt so guilty. Eventually that guilt faded, until my second baby was born, of course. And although I had been through it before, and went on to breastfeed for eight months, nursing guilt still reared its ugly head. When I was pregnant with baby number three, I wanted to try again, and I learned firsthand how important a supportive partner can be when helping a mom get over her breastfeeding guilt.

After all of my breastfeeding challenges — from mastitis to undersupply to everything in between — you'd think I would've decided to just use formula. At first my husband wanted us to use formula, because he didn't want me to have the feel the overwhelming stress and the relentless guilt I had felt before. Ultimately, though, my partner told me he supported whatever choice I made. After all, it was my breasts we were talking about, and I felt confident in my ability to breastfeed. I knew what my body could(and couldn't do. I spoke with a lactation consultant and planned to both breastfeed and supplement with formula.

Then our son was diagnosed with a cow's milk and soy protein intolerance, and my doctor told me that my breast milk was making him sick. I had some tough choices to make — I could eliminate dairy and soy from my vegetarian diet to give my son a small amount of breast milk everyday, or I could switch to formula and deal with even more guilt. My husband was the one who gently convinced me that feeling guilt over things beyond my control — like undersupply and food intolerances — was about as necessary as it was helpful, and that my health mattered, too. He was there with me every step of the way, and at all hours of the night, and made a huge difference in my ability to get over the guilt of not being able to breastfeed. So if you're struggling to nurse and have a loving, supportive partner by your side, make damn sure they do the following: