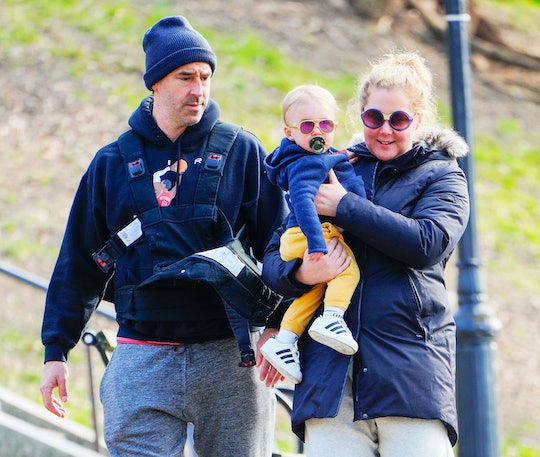 You don't really know what to expect the first time you menstruate after giving birth until it actually happens. But, thankfully, Amy Schumer described her first postpartum period during a recent interview with the bluntness and candidness all moms deserve.

During an interview with BuzzFeed, Schumer, who gave birth to her first child with husband Chris Fischer in May 2019, was as transparent as ever when it came to talking about her changing body as a new mom and that first postpartum period. "I want to get rid of TMI," the Trainwreck actress told BuzzFeed.

"There’s no shame. My first postpartum period was just like, holy f*cking sh*t. Is this normal?" Schumer went on to share during the same interview with BuzzFeed. "I had a C-section, so for some reason, I thought it might not be bad. I have endometriosis, and so it was a perfect storm. Like, the skies opened up. It was like that for six damn months."

The first postpartum period is different for every new mom and super unpredictable. According to Healthline, moms who bottle-feed can expect their first period about five to six weeks after giving birth while breastfeeding moms might not have their first period until they wean their little one. Or it might come back within a few months, the site notes, so expect the unexpected. And when it does come back, boy is it different. Heavier flow, more cramping, small blood clots, irregular cycles, and generally just more pain are just some of the symptoms new moms can experience with their first postpartum period.

Throughout her pregnancy with her now 1-year-old son Gene, Schumer, whose new HBO Max docuseries Expecting Amy premiered earlier this month, was candid with her fans about what she had experienced, including multiple visits to the hospital due to her hyperemesis gravidarum diagnosis.

"Everyone who says the second trimester is better is not telling the full story. I’ve been even more ill this trimester," Schumer said in an Instagram post while she pregnant with Gene in December 2018. "I have hyperemesis and it blows. Very lucky to be pregnant, but this is some bullsh*t!"

As it happened with Schumer, pregnancy and that first postpartum period can really deliver the one-two punch.