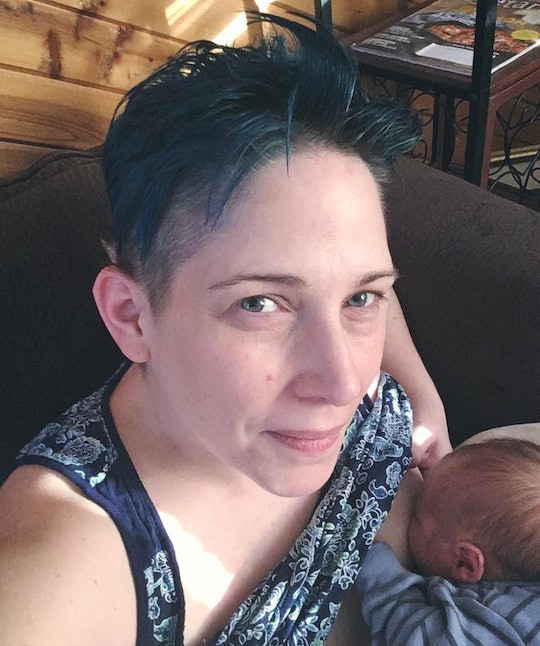 10 Things *Way* More Embarrassing Than Flashing A Stranger While Breastfeeding

I was pretty shy before I had kids, especially when it came to my body. So the thought of breastfeeding in public, for me, was downright terrifying. I was committed to getting over my fear, though. I wasn't going to hide in my house all day, and I knew, deep down, that breastfeeding was nothing to be ashamed of. So, I bought nursing covers, nursing bras, and special tanks, determined to avoid the whole "flashing a stranger while breastfeeding" thing.

Of course, my attempts were futile. In fact, I flashed a relative stranger the very first time I breastfed in public. I was out with friends at a restaurant and my baby got hungry, as babies are known to do. I fumbled with my cover, nursing top, and bra, but somehow managed to latch my now-angry newborn. I felt so proud of myself, you guys. I was nursing in public, like a rock star! Then a woman at a nearby table said, "Honey, you might want to put that one away," at which point I looked down to realize I had a boob hanging out.

I was so embarrassed. Worse, I’m pale AF and blush easily, so it was impossible to nonchalantly hide my shame, or tell the woman at the nearby table what I really thought of her rude comment. Instead, I managed to mumble a "thanks" through my hot tears, then went out the car to finish feeding my baby. In short, I was humiliated.

Fortunately, nursing in public got easier, and I got more comfortable with the idea that, while nursing, someone might see one or both of my breasts. And honestly, in retrospect, me flashing a restaurant while feeding my child is nothing when compared to the other embarrassing, mortifying, and unbearably awkward moments I've survived in the 10 years I've been a mom. So if you're worried about any awkward moments you might face while nursing in public, have no fear. I can promise you, those moment will be nothing when compared to the following:

More Like This
There’s A Reason Your Baby Always Falls Asleep While Breastfeeding
Can You Breastfeed After A Breast Lift? Experts Explain
25 Mother And Daughter Halloween Costume Ideas That Are Cute And Spooky
If Breastfeeding Makes You Tired, Here’s How To Keep Your Energy Up