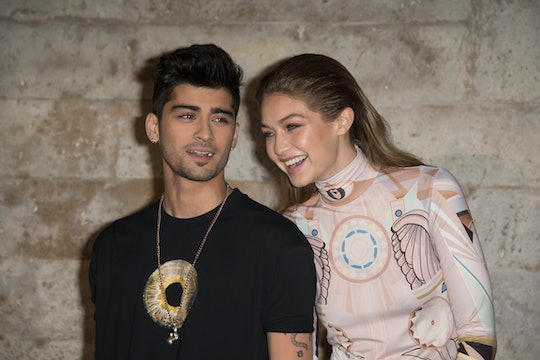 Just weeks after giving birth to her sweet baby girl, Gigi Hadid shared another new photo of her newborn daughter in honor of her first Halloween. And while this brand new photo doesn't show her face, it's as adorable as you'd expect.

Over the Halloween weekend, Hadid shared the first photo of her daughter with her and Zayn Malik in the frame on her Instagram Story, marking their first family photo together. In the photo, the new mom, dressed as a video game character and smiled at her daughter, who's dressed like the Hulk with a crocheted cap, while Malik (wearing a Harry Potter costume) held the little girl in his arms.

The baby girl’s face was hidden by an Instagram sticker of the Hulk, but you can still tell that she's a cutie pie.

Before sharing this sweet family photo, Hadid posted a gorgeous, simple black and white photo back in September of her daughter's hand to announce her birth. "Our girl joined us earth-side this weekend and she's already changed our world," Hadid captioned the photo. "So in love."

Hadid has not revealed any major details about her daughter, like her name, but one thing is for sure: She is already so loved by both of her parents, who have been dating on-and-off since 2015, according to Vogue.

Also in September, Malik took to Instagram where he shared a different black and white photo of their daughter's hand gripping his finger. "To try to put into words how I'm feeling right now would be an impossible task," he wrote. "The love I feel for this tiny human is beyond my understanding. Grateful to know her, proud to call her mine, and thankful for the life we have together."

Hadid confirmed her pregnancy with her first child during an episode of The Tonight Show with Jimmy Fallon in April after TMZ first reported that she was expecting a baby girl. Hadid told Fallon that while "obviously we wished we could have announced it in our own terms" the couple was "very excited and happy for everyone's well wishes and support."

Hadid and Malik, of course, aren't the only one who've been excited. The model's mom, Yolanda, told Dutch news outlet RTL Boulevard in April that she was "excited to become Oma in September." "We feel very blessed," she added.

Meanwhile, Hadid's sister Bella shared a photo of their "buns in the oven" ahead of her niece's arrival. And their dad, Mohamed Hadid, even penned a poem for his grandchild-to-be, which he shared on Instagram earlier this month. "I wish for you the sun and moon, I wish for you a happy time," he wrote. "Know that grandpa's always here, I'll do anything, anything for you my dear."

Hadid had kept much of her pregnancy private, choosing to only share a few photos with her fans. She explained her reasoning behind this during an Instagram Live in July. "Obviously, a lot of people are confused why I'm not sharing more, but like, I'm pregnant through a pandemic," she said. "Obviously, my pregnancy is not the most important thing going on in the world. That's a reason I felt that it's not really something that I need to share a part from with my family and friends."

Of course, her little one arrived during a pandemic, but hopefully Hadid will make everyone's nightly scrolls through Instagram a little cuter with a few more updates about her baby girl.

This article was originally published on Sep. 24, 2020