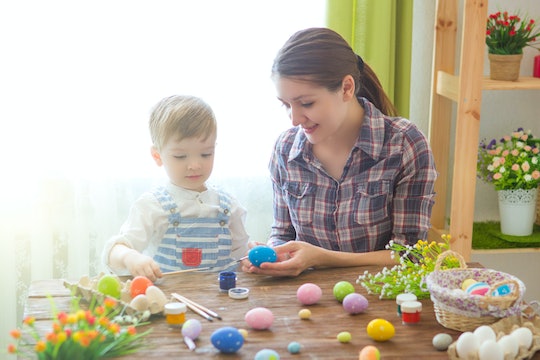 Here's Why I *Really* Keep Jesus Out Of Easter

Easter is right around the corner, and it seems like everyone is talking about it. I don't think it's that big of a deal, though. Yes, my family has plans to attend a free, local egg hunt, but that’s basically it. I do know folks, however, who are out there are shopping for new, pastel-colored outfits, putting together absurdly overpriced easter baskets, and well, preparing for the return of Jesus Christ. I keep Jesus out of my Easter celebrations these days, though, and I don't really feel the need to apologize for it.

I grew up in a household that was somewhat “Catholic-lite”. In other words, we’d infrequently attend mass but still believed in the sacraments and prayed to Jesus and Mary on a rather regular basis. Easter was one of the few times I remember going to church as a child. Actually, we’d always start on Palm Sunday (which I enjoyed because us kids had the glorious opportunity to hold palm fronds and wave them in the air), and while we didn’t attend church on Good Friday, we always made sure not to eat and observe a moment of silence at noon.

Easter, of course, was always the main event. My mother would buy me a new flowery dress and fancy hat, and off we’d go to La Divina Providencia, our local church.

As a child I didn’t know I had options as to what I believed in, spiritually. My parents weren’t exactly offering up any additional examples of various belief systems. All I knew was that a guy got nailed to a cross while he was still alive and awake, and that story seemed pretty awful to me. And because it was so awful, we were supposed to try and be good people and avoid doing things like lying or stealing or cheating or killing. I suppose it didn’t occur to anyone that maybe we don’t all need the threat of eternal damnation to know right from wrong. We were told to act a certain way because of a potentially disastrous afterlife, not because it was simply the right thing to do.

Easter is more about the end of winter and first days of spring than it is about a guy whose potential existence has sparked a religion that, at least in my opinion, has left more than a few people with some extreme opinions on a wide variety of subjects.

I have fond memories of my Easters as a child, but none of them were really about Jesus. While my mother tried to explain JC's significance, what I enjoyed most was spending time with my family and munching on the head of a chocolate bunny at the end of the day. So, decades later when I became a parent, talking about Jesus in relation to Easter never even crossed my mind. After all, I chose to be Agnostic in my teen years, and am more or less a witchy Atheist these days. Easter is more about the end of winter and first days of spring than it is about a guy whose potential existence has sparked a religion that, at least in my opinion, has left more than a few people with some extreme opinions on a wide variety of subjects.

The religious faction of my family likely wouldn’t appreciate my efforts in keeping Jesus out of my Easter celebrations. After all, it’s a really important holiday for Christians (more than Christmas, some might say). But even if I explained it all to my son as story rather than something some folks take fervently as fact, I still don't see the point. How would a story about a man who was beloved by some, but hated by others, and made to suffer until he died, beneficial to a 4-year-old child? I don’t even like letting my son watch anything violent on television, so why would I take him someplace where there’s images of a guy nailed to a cross everywhere? Seems a little too violent for my taste.

My son will eventually encounter all kinds of different opinions in the world, and I am fine with that, but I won’t take him to go get indoctrinated in a set of beliefs and call it a "celebration."

And while I know there are many LGBTQ-friendly churches located across the country (many of which are in my neighborhood), I still don’t like some of the messages espoused in and by the church. Christianity, like many other religions, feels rooted in patriarchy. It’s all about a father being the creator and watching over you, and how women need to be pure and virginal and submissive for and to their husbands. I don't want my son to hear about women being "obedient" to their spouses.

I just don’t feel comfortable with the idea of my son spending time in a place where he may pick up on messages that don’t really align with the beliefs and philosophies my partner and I have chose to raise him with. I believe in equality for all, as I'm an intersectional feminist through and through, and I am also extremely pro-choice. My son will eventually encounter all kinds of different opinions in the world, and I am fine with that, but I won’t take him to go get indoctrinated in a set of beliefs and call it a "celebration." Not on Easter, and not on any other day of the year.

Plus, Jesus and the Easter Bunny weren’t exactly chilling in the New Testament. So, at least for me and my family, there’s really no reason for us to make some connection between baby chicks and eggs and the supposed resurrection of a man. The holiday has been linked time and again to a number of ancient stories about death and rebirth, from Horus to Ishtar, and all that bunny and egg iconography stuff is simply related to the new season of the year, when many animals start to reproduce.

I respect that this particular holiday has religious connotations for a large amount of people. I recognize I may be in the minority when it comes to how I choose to observe and celebrate this day.

So while my son will eventually know the story of Jesus, I'm sure, I also plan to share the stories of Dionysus and Ostara and any others connected to the origins of Easter. The way I see it, all of these stories are worth repeating. Inanna is about as real to me as Jesus, which is to say, they make for good characters in an everlasting tale, but they have no impact on my actual life.

To me, Easter is just another fun holiday where I can bake and make crafts and go to events with my son. Maybe we’ll get a stuffed animal or some jelly beans, or even dye some eggs. But what we won’t do is go to church and talk about a savior I, frankly, don’t believe in. I respect that this particular holiday has religious connotations for a large amount of people. I recognize I may be in the minority when it comes to how I choose to observe and celebrate this day. But, at least so far, this set up works for my family. My son has yet to think about or care about the existence of some creator. He’s too busy playing hunting for candy-filled eggs.

I prefer it that way.

More Like This
5 Superstitions About Babies Born On Valentine’s Day
When Does A Baby Recognize Their Father? A Pediatrician Explains
What To Do If Your Toddler Keeps Taking Off Their Diaper At Night
The New Dad In Your Life Will Love These 20 Sweet Valentine's Day Gifts
What Parents Are Talking About — Delivered Straight To Your Inbox