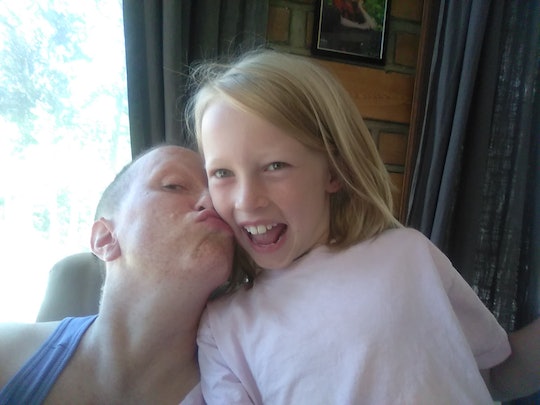 How Accepting My Child's Gender Identity Helped Me Face My Own

My first child was assigned male at birth. Despite my partner and I's best attempts to let our child be who they were sans gender roles, we ended up pigeon-holing them into society's "male" box pretty quickly. We cut their hair, dressed them in dark blues, masculine greens, and polos. We filled the house with trucks, trains, and cars. The words "buddy," "big boy," and "little man" became regular utterances. But our kid had different plans. And two years later I'm still trying to unpack how facing my child's gender identity helped me confront my own.

My oldest was 5-years-old when they (our child uses they/them/theirs pronouns) asked when they would grow up to be a girl. Though queer myself, and actively working as a queer-friendly psychotherapist, I was not prepared for that particular revelation. It hit my partner and me hard with our own unintentional hypocrisy. We had professed and promised and intended and absolutely wanted to raise our child the same, regardless of their assigned sex, but we realized we had allowed ourselves to thrust our child into a binary box and all the gendered story lines that go along with it. Because, and make no mistake, unless we are actively fighting society's gender roles, we are absolutely complicit in creating the gendered role expectations for our children.

I'd never had to personally confront the question of gender identity until my child was born, so I never did. I'd had more exposure than most cisgender (non-transgender) people to the trans community. As a therapist I helped to run a transgender men's group, worked with trans survivors of sexual trauma, had trans friends and colleagues, and had been a vocal advocate for trans rights. But even in my activism I was a sub-par ally at best, making unacceptable mistakes, and still quite clearly seeing trans people as other. I was totally embroiled in cisgender privilege.

The thing about privilege is that you don't often think about or know you have it. In fact, that's part of privilege's design. When a culture is set up to make a certain thing "normal," the person who already fits those "normal" characteristics doesn't have to question anything. It's only when you fall so outside of the "normal" paradigm that you don't have any choice but to question why a society is set up that way.

So when oldest dove headfirst out of the cars and trains box we'd put them in, I supported them with all my heart. But if I'm honest, I was also uncomfortable. You see, my child was anything but ordinary from the very beginning, and standing up for their gender identity was no different. They always questioned the double-boxed system that is our cultured sex and gender binary. They always said, "People tell me I have to pick one. Why? I'm just me. I'm both." I knew my child was telling their own individual truth, but it made me nervous. Most people were just barely beginning to understand binary transgender adults. How the actual f*ck could I even begin to explain my non-binary, gender expansive child to the people in our world when I barely understood? How I could keep them safe in this gender-binary-obsessed world?

And as I began absorbing the literature I felt an uncomfortable, though not unfamiliar, squirming in my guts, I was noticing more than just my child in this research. I was recognizing something far more innate and heretofore unspeakable within myself.

I was so afraid that someone — everyone — would force them, maybe violently, into one or the other of the boxes. I needed to be armed with all the answers, all the research, all the facts that would back up my child's experience of themselves, so I got my hands on everything I could. And as I began absorbing the literature I felt an uncomfortable, though not unfamiliar, squirming in my guts, I was noticing more than just my child in this research. I was recognizing something far more innate and heretofore unspeakable within myself.

In listening to and supporting my child in expressing themselves authentically, I found that we had more in common than my uterus and DNA. I, too, was taught that gender and sex were binary. I, too, was told you were either a boy or a girl. Before I had bodily autonomy —hell, before I had sentience — it was decided based on the look of my genitalia that I was a girl. In other words, I fell into the pink and flowery box. But I never really did fit into that box. I just knew that the blue box filled with motor oil was so not my box either. By default, because I knew I wasn't a boy, I had to be a girl. Right? Much like my child's first five years of life performing boyhood, I performed girlhood.

Now, I was pretty lucky in the sense that my primary caregiver was a single mother who was actively feminist. She eagerly encouraged me to question traditional gender roles. As a result I had the freedom, even within an oppressively binary culture, to drop the idea of how to fit into the pink box that just didn't fit. Instead, I focused on how to change what society perceived of as "a woman." If I couldn't fit in the box everyone told me I was already in, I was going to change the damn box.

When I was around 13 years old I learned that bisexuality was totally a thing and chalked up all the, well, queerness of me to that identity. Once language got a little more nuanced I found solace in the pan/demisexual titles. But those didn't really fit, either. All of these identities, however fleetingly fitting, were about sexuality. This queerness of me wasn't just about sexual attraction, behavior, or turn-ons. It was about something more core to who I am.

Constantly having to justify my existence, arguing with people I care about over whether or not my understanding of myself is "just a phase," or "really even exists," or "is all in my head" sucks on a massive scale. I don't want to do it anymore.

And just like I had been originally assigned my sex and gender, at the ripe old age of 35 I was handed an identity that actually seemed to fit. Finally.

In my unexpected role as the mom of a transgender-creative child, I pursued becoming a gender therapist so I could advocate for my child personally and as a qualified professional. At the time, I worked for a health insurance company. With the platform provided by a lovely man who ran the LGBTQ employee group, I was eventually able to design and implement a national education and inclusivity initiative to train the entire company on transgender cultural competency, health disparities, and inclusion. It was in one of these planning meetings where the chair of the aforementioned employee group, who had become a trusted friend, said something along the lines of. "Oh, Reaca, you're genderqueer. Can you walk us through blah-dee, blah-dee, blah?" Clear as day and casual as can be.

And that is when my world stopped.

Genderqueer. Even as I was championing my child's gender expression, and blazing the trail for my clients, I was dissociated from any question of my own gender. I began to shake and tear up. I was training hundreds of professionals on terms like "genderqueer" weekly, and I never once made the personal connection. All of a sudden a cool peace washed over me. Followed in quick succession by a warm calm. I felt right. The feeling was like coming home.

To be honest, over the past year or so since I've come home to my gender identity I haven't come up with an answer as to how this changes, or if it even needs to change, anything about the way I live my life. My increasingly expansive, more thorough understanding of myself as a genderqueer, non-dual, non-binary, sometimes woman(ish) human doesn't really need validation from anyone outside of my own self. Although, I must admit that hearing my child use my they/them/their pronouns, and seeing my partner write them on my name tag at a family event wells my eyes with tears and my insides with love. They both see me. They both love the me they see.

And just like I had been originally assigned my sex and gender, at the ripe old age of 35 I was handed an identity that actually seemed to fit.

I don't know that a big "coming out" is necessary for me again. Let me tell you, when you've been out as bi/pansexual since childhood coming out over, and over, and over again is exhausting. Constantly having to justify my existence, arguing with people I care about over whether or not my understanding of myself is "just a phase," or "really even exists," or "is all in my head" sucks on a massive scale. I don't want to do it anymore.

I want to be me. And like everyone else, I should get to be me. I don't need anyone else to be me or be like me. I'm perfectly happy respecting your understanding of yourself and have no mysterious or nefarious agenda to try to change others' gender identities. If you are binary transgender or binary cisgender, you do you, siblings! I fully support your autonomous and authentic existence.

I ask that you find a way to be perfectly happy respecting my understanding of myself, too. I firmly believe that if we each find ways to fully step into our true nature, the fullest expressions of our true core selves then the world is more capable of extraordinary balanced harmony. If you care to know me, you'll know me. All of me. The queerness of me which is inextricable from me.

And if you don't? Your loss.

More Like This
If Your Kids Love Their Elf, You Don't *Have* To Put Him Away On Christmas
Festive Mommy & Me Holiday Nail Ideas To Try
101 Advent Calendar Activities, From Books To Read To Cookies To Bake
The 16 Best Subscription Boxes For Every Kind Of Kid