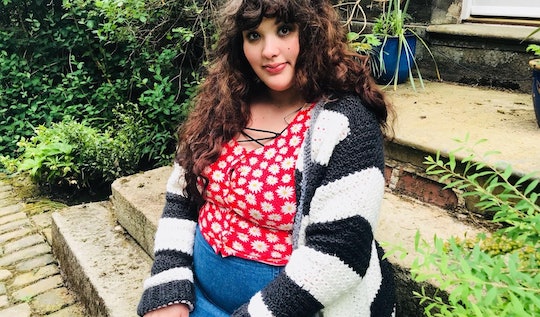 What To Do When Someone Asks If You're Pregnant... Or "Just Fat"

For as long as I can remember, my tummy has been a subject of conversation, whether it was flat, wobbly, or assuming the baby bump form. I was a thin kid until age 9 or 10, when sudden weight gain left the adults around me concerned. "This is the belly of a middle-aged man, not a child," some would say. "What a waste of a pretty face," another might add, gesturing at my core in disapproval. Raised in a family that is contrarian above all, the commentary didn't stop if ever I lost weight. "Marie's femininity is disappearing," an aunt once told my mother. "Why are you starving yourself?" the same relatives who'd previously fat-shamed me would angrily ask, never assuming any responsibility for their potential role in the situation, of course.

Although I spent short periods of my life in a thin body, my fatness was never gone for long. Through high school, I coped with bullying by envisioning a collegiate existence where no one would be vapid or vain enough to give a sh*t about dress size. I imagined that my life would drastically improve once I left small town New Jersey for The Big Apple, not having yet conceptualized that body-shaming and fat-phobia permeate American culture, and much of the world, rather than just high school halls and parents' houses.

I catch people watching me in stores or on public transportation, seemingly wondering whether I'm pregnant or just fat.

Even now at 27, I'm no stranger to an awkward conversation about my stomach. As a plus-size introvert, experience has proven to me time and time again that hiding under a duvet reading a cheesy YA novel will almost always be significantly less uncomfortable than interacting with actual humans, many of whom can't wait to sneak in a comment about the space I occupy.

When I'm pregnant, however, these conversations shift. I catch people watching me in stores or on public transportation, seemingly wondering whether I'm pregnant or just fat; wondering whether to congratulate or shame me. Awkward baby bump convos are survivable, though, even if they don't seem to be in the moment.

Unpleasant baby bump-related questions and conversations follow most pregnant people around, and they can take infinite forms. As women and femmes, our bodies can often feel like public domain: Figures that those around us are free to discuss and tear apart for their own enjoyment. When we're pregnant, a lot of those same people don't just feel entitled to talk about our bodies, but also to touch them. They reach out to have a feel of our bellies without ever asking whether it's OK. For some of us, this is an experience that leads to more than one awkward bump chat.

As a plus-size pregnant person, conversations like these have seeped into my life more times than I'd like to think about, with the added, 'So, um, are you expecting or is this just, like, how you are?' inquiries.

Then there are all the talks about our changing bodies. Are we gaining enough weight in our bellies, or are we gaining too much? Have we checked out the latest stretch mark-prevention cream? How can we stop the linea negra from appearing at all? Are we worried about never having a flat stomach again? What will we do to regain our pre-baby figures? The latter should, apparently, be a new mother's prime directive.

As a plus-size pregnant person, conversations like these have seeped into my life more times than I'd like to think about, with the added, "So, um, are you expecting or is this just, like, how you are?" inquiries. Most often, I want to lie. I want to tell whoever is asking that this is just how I look, because it shouldn't matter one way or the other. My weight shouldn't be given a pass when I'm carrying a child, only to be condemned again when it stays more or less the same after that child is out of my body.

Usually, though, I'm too tired for a fight. Instead, I confirm that I'm pregnant and wait for the follow-ups. Did I know I was pregnant, given my size, or was it a late surprise? Am I worried about how my weight will affect my unborn baby? At least my kid has "plenty of room to swim around," though. That's definitely how wombs work.

There are a few tactics I've found useful in getting through these less-than-copacetic exchanges. Sometimes, if I'm feeling emboldened enough (which isn't admittedly as often as I'd want, thanks to being eight months pregnant while also raising a toddler), I'll be as honest as possible with the person in question. I'll ask why they feel it important, or necessary, to police my body. Or why they believe women should seek to eradicate every sign of pregnancy once they're not pregnant... as if the entire nine months were something shameful. I'll explain that I have just as much of a right to occupy space when I'm only fat as I do when I'm also pregnant, and I'll try my best to make them understand that women's figures (contrary to popular belief) do not exist solely to be dissected or approved of by them.

When all of this seems like too much work, however, I try to reorient my own thoughts. I remind myself that everything about my pregnant body is admirable. That I'm going through one of the toughest physical ordeals a person can go through, and that I deserve to treat that as an achievement and not a source of condemnation.

I remember that my stomach is a part of me. Even if it hadn't carried two kids inside it, it should be treated with respect. It helps me walk through this world. Its shape and size and abundant rolls have contributed to the experiences I go through each day. Without its girth, I would not have as much of an instant asshat detector. I would not know whether someone is prejudicial, fat-phobic, or otherwise unworthy of my time as swiftly as I do now. I would not be as familiarized with my own capacity to get through sh*t; to find peace in a body so many waste time hating.

If I need a little extra push to reorient my thoughts, I try to find solace in others. I spend my time on social media following and engaging with fellow feminist mamas, particularly plus-size ones who can relate to my specific experiences. I inundate my feeds with imagery of badass baby bumps of all shapes, housing all varieties of stretch marks. I then remember one final thing, which is that almost every awkward bump-related conversation is the fault of a system that teaches women they are never enough. In other words, a system I don't believe in.

A system I don't have to participate in.