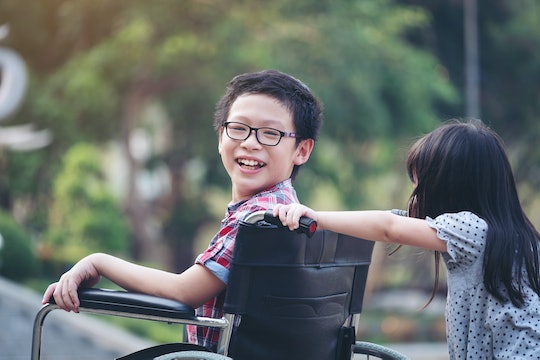 Every parent knows it's challenging to raise children, especially when you're simultaneously facing challenges of your own. And for parents and kids with disabilities, those challenges often include the way people treat or perceive you. There are a variety of misconceptions about people living with disabilities, including the fact that there are numerous types of disabilities, both visible and invisible. That's why it’s up to everyone to educate themselves, be inclusive and accommodating, and, if they're parents, educate their children. So, how do we teach our kids about disabilities? Romper reached out to parents with disabilities and parents of children with disabilities willing to help us all be better.

As a mom, one of my main goals is to make sure I raise a child who grows up to understand that the world is filled with a variety of unique people who are all deserving of respect and understanding. So not only do I take the time to teach my son about sexism, racism, and classism, but I make sure he knows about ableism and what it means to be an able-bodied ally. Having said that, I know I will fail at this goal; a fact made all too real to me after my son was loudly curious about an individual's hook prosthetic. I know it's OK for kids to be curious, but as parents we need to help guide their curiosity. I’ve also become more aware of the importance of exposure, made even clearer to me after seeing a production of Into the Woods by the Phamaly Theatre Company, which exclusively hires actors with disabilities.

So with that in mind, and because we can and should always take the time to be better, I spoke with a number of mothers who are either disabled themselves or raising kids with disabilities, and asked them to share their thoughts on teaching all kids disability awareness. While the onus is always on us to educate ourselves, these mom did have a few words to share:

More Like This
16 Instagram Captions For Pictures Of Your Kids Making A Mess
Crate & Kids’s New Back-To-School Essentials Are Just Too Cute
12 Genius Floats With Canopies (& Cupholders), So You Never Have To Leave The Pool
My Nanny Showed Me How To Be A Mother