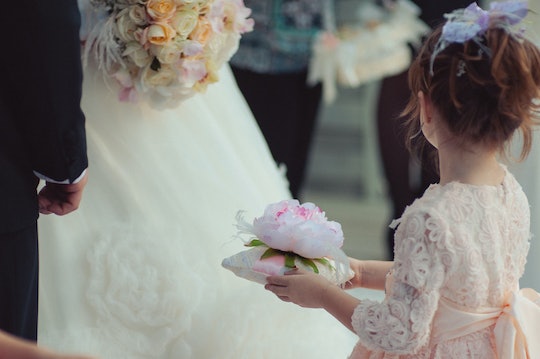 I Banned Babies From My Wedding & I’m Not Apologizing

It's officially wedding season, so you're bound to received at least one invitation to at least one blessed event. If you're a parent, you should probably look closely at that invitation to see if your kids are invited, too. But even if they are invited, I hope you will consider leaving them at home, especially if they are younger than, like, 5. I feel so strongly about this that I banned babies from my wedding, and make no mistake: I would do it again in a heartbeat.

When I heard that the Duke and Duchess of Cambridge — Kate Middleton and Prince Charles — decided not to bring newborn Prince Louis to Prince Harry's upcoming royal wedding to Meghan Markle, I immediate thought, "good for you." I actually think they should leave their older kids home, too, but that's just me. In my opinion, weddings are not for kids.

I have to admit, when I first banned babies and children from my wedding it was for purely selfish reasons. My soon-to-be husband and I were young, and had very few friends or family members with kids. We wanted to get married at night, at a historic bed-and-breakfast on Halloween and at a time when it would be considered irresponsible to have children up and awake. Plus, our idea of a serene, candlelit ceremony totally didn’t involve kids, and neither did our desire to party at our reception afterwards. So, as a result and so we could have the wedding we envisioned, we asked people if they would kindly leave their children at home.

This decision was not without its consequences. My sister-in-law actually chose not to attend, because I didn't invite her then 3-year-old toddler to the occasion. She didn't speak to me for months afterwards, either. It totally wasn’t personal, though, and in the end my husband and I felt like it was our choice (not to mention, our wedding). And in the end everything was picture perfect, I think, in part because there were no kids present. Now that I’m a parent, I honestly feel even more strongly about not bringing young children to weddings, too.

From my perspective, as parents it's our job to set our kids up for success.

To be clear, it's not like I am some baby-hating monster. In fact, I love babies — especially my own — so much that I don't think you should take them places where they're not going to have a good time. From my perspective, as parents it's our job to set our kids up for success. So I try really hard not to put them in situations where they can't thrive, where they'll grow bored, or where they'll be asked to do something that is well outside the limits of their developmental capabilities. Babies and toddlers don't belong at weddings because weddings aren't fun for babies and toddlers, and they are bound to not live up to your unreasonable expectations for their behavior.

Marriage ceremonies are long and can be boring for adults, so one can only imagine how a small child is going to handle a drawn-out event in which sitting still is a requirement. What's asked of a kind wedding guest isn't a feasible expectation to place on a child. So, personally, I think it's extremely unfair to set the bar too high for a child's abilities and attention span. If a child ends up crying in the middle of a ceremony, throwing a tantrum, has an epic blowout, or plays with high-priced decorations, it won't be the child's fault: it will be the fault of every single adult that expected that child to act differently.

I would honestly rather skip someone’s nuptials than put my kids, and everyone else at the ceremony, in the position where they won’t have a good time.

No one wants to be the person at a wedding with the baby that cries, or the toddler who runs down the aisle.

Besides, parents don’t really have a good time at weddings when they bring their kids, either. They almost inevitably end up missing part of the ceremony because they are walking around with a baby strapped to them, or sitting in the car with the napping toddler. They can’t have drinks at the reception, because someone has to tend to their baby, and they can’t eat, because they have to feed their hungry little one first. And when they might like to spend time on the dance floor, they're stuck chasing or carrying a kid around.

Whenever I have dragged my kids with me to weddings, I have a immediately regretted my decision. When Prince George made headlines for throwing a royal tantrum at his aunt Pippa Middleton‘s wedding last year, I could totally relate, but was completely not surprised. I felt bad for his parents, but guys, what did they expect from a 3-year-old toddler at a fancy wedding?

For me, the wedding wasn't fun. It was work.

Now, I know you might be thinking that weddings and receptions probably mean a lot of people will be eager to help a new mom and dad enjoy themselves, by holding their baby for them. However, according to What to Expect author Heidi Murkoff, letting other people hold your baby is not such a great idea either. CNN reports that because your baby has a new immune system, you actually don’t want to take them to crowded places, with lots of people and germs — like weddings, y'all.

When I comes to toddlers and older kids, moms end up being responsible for bringing along food they will actually eat, and leaving early so they get to bed on time. When my twin sister got married and asked my 1-year-old daughter to be her flower girl, I almost said no. No one wants to be the person at a wedding with the baby that cries, or the toddler who runs down the aisle. My daughter ended up doing just fine, thankfully, but my role in the wedding became chasing her around, comforting her when she was cranky, and holding her when she got tired. For me, the wedding wasn't fun. It was work.

When I heard that Princess Charlotte (age 3), and Prince George (age 4) were going to be in Prince Harry and Meghan Markle's wedding party this weekend, I cringed. I hope, for their sake, and also for Middleton and Markle, that everything goes well. It’s totally a gamble, though, when you bring kids to a wedding.

So yeah, I banned kids from my wedding, and I totally support other brides and grooms who choose to do the same.