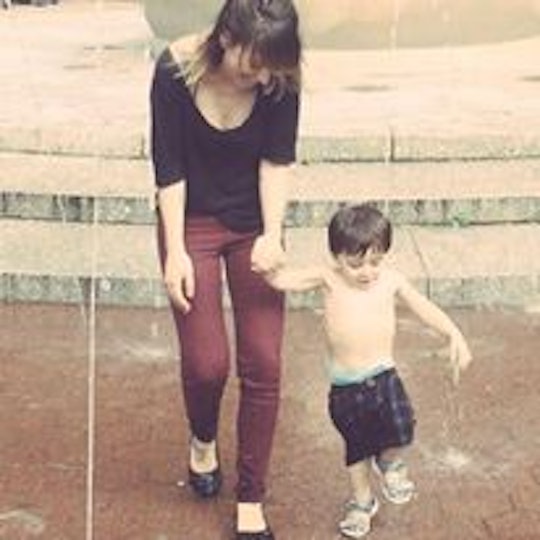 There were so many emotions I was looking forward to feeling after I brought my son into the world. Relief being high up on that list, but also an overwhelming love and an innate, maternal bond and a protective quality on par with that of what a lioness feels for her cubs. It turns out, I felt some of those things, but I also felt sad. Like, really sad. So very sad. Debilitatingly sad. So sad, that I had to stop breastfeeding and talk with a counselor and was eventually prescribed medication. Then, one day, I stopped being sad and my postpartum depression went away. Just. Like. That. Just like how so many people told me it would, if only I stopped sitting around and feeling sorry for myself. I honestly couldn't believe how easy it was. I guess I still can't.

I hesitate calling it a miracle, because really my "postpartum depression" was just an excuse for my silly sadness, so it was more me just putting in the "hard work" than me wishing for some inexplicable change in my mental health or overall mood. I really can't believe the answer was in front of me the entire time; I was just too busy worrying about science to simply stop being sad. I mean, how foolish. I was so busy feeling like a completely different person — like my body wasn't mine and my new life wasn't mine and this baby that I had grown inside my body, was a baby I was ill-fitted to care for the way he deserved to be cared for and loved — that I didn't see that, at the end of the day, all I really needed to do was "smile." As a woman I have spent the majority of my life listening to people tell me to smile, so it's strange a grin isn't my default response to anything remotely unpleasant. Everyone knows people who catcall are just trying to be "polite." Maybe they're trying to help women with postpartum depression get better, too.

Instead of realizing that all I really needed to do was turn my frown upside down, I relied on a medical professional to assist me with the many side effects of postpartum depression. The insomnia was relentless, and I couldn't simply "shut my brain off" by telling myself that I needed to sleep which, of course, is strange, considering I was able to shut off my postpartum depression simply by telling myself that I should just be happy. I would stay up, night after night, worried that my son wouldn't wake up from his peaceful sleep. I stared at his small chest, concerned when it wouldn't rise in the rhythm I had come to expect. Why didn't I just tell myself to get over it? I mean, if I can make myself happy on a whim, I totally should have been able to turn off the part of my brain that felt so protective of my son, so incredibly scared that he would die, that I was losing sleep. I think I was just lazy, like the mornings when my alarm goes off and I don't want to take the time to reach the few inches I'd need to reach in order to turn it off. There's a switch in my brain I clearly could have just flipped, but man, that's a long reach, you guys. I guess I wanted to just lay there and listen to the alarm scream in my ears until I physically, mentally and emotionally couldn't take it anymore.

Instead of simply leaving the past in the past, I allowed the death of one of my twins to dictate my hormone levels and my mood. I should have just gotten over that moment at 19 weeks, when a doctor told me that one of my twin sons' heart was no longer beating. How hard is it, really, to just forget about all the plans you've made for your future? After all, I've been through my fair share of breakups. Now that I'm happy, simply by deciding to be happy, I can't believe I was so lazy as to let the death of a twin impact my mental health on any level. You'd think I would have wanted to use my internal, make-shift memory eraser from Men In Black sooner, but I'm a masochist. What can I say, I like the attention soul-sucking pain brings. It's really, and truly, a thrill. Thankfully, someone told me to just "be happy" so I could find that "forget" button and go on with my life, and so other people could feel comfortable around me. Who knows how long I would have spent mourning the loss of my twin son, or trying to come to terms with a traumatic birth that left me pushing a son out of my body that was alive, and a son out of my body that was dead. I'm just so thankful for the people who told me to simply "adjust my mindset" and "put in the work" and "decide to feel better." They're the Will Smith to my Tommy Lee Jones. They're so brave.

I don't know why I let the fact that I had to birth a child that was dead, leave me feeling so overwhelmed and anxious. All it took was me telling myself to "be happy" to put it all out of my mind. Now, it's like it never happened, thanks to some strangers comment on Facebook. That's so marvelous. Now I don't feel hopeless or scared or overwhelmed. I don't think my son will inexplicably die (just like my other son) and I am not afraid that I won't have to go through another painful loss, again. I simply trained my mind not to think that way, because we all know the human brain is extremely simple and not at all complex. My appetite is back and now I'm not afraid to bond with my son because, hey, I know he's not going anywhere. After all, a stranger on the internet told me so.

Perhaps most importantly, I'm just flabbergasted that I allowed science to overrule the thoughts and opinions of total strangers. Why would I take the medical community's word over some online commentator, who doesn't believe in mental health and thinks women who suffer from postpartum depression are just "weak" or "bad mothers" or, my personal favorite, "desperate for attention." That last thought is pretty valid, if you think about it. Who doesn't like being at the mercy of the social stigma our culture has attached to mental health. It's the most fun. I can't believe I haven't allowed myself to be this sad before, because the constant attention I get in the form of name calling, judgement, shame and pseudo-science is the only way to fill my postpartum days. I'd be such a bored, unhappy new mom without all of that unsolicited commentary.

If only more mothers knew how easy it is to stop suffering from postpartum depression. Don't they have random commentators on their social media feeds to remind them that postpartum depression isn't really a thing? Don't they have someone telling them that all they really need to do is just "be happy" and stop "being sad" and, just like that, they won't feel like they're drowning in front of a group of people with life preservers who, for whatever reason, just refuse to help? Don't they know that if they just talk to someone with absolutely no medical training; someone who hasn't spent time in the mental health community as a counselor or psychiatrist; someone who has never experienced postpartum depression for themselves, they will instantly feel lifted out of the fog that has become their life? Don't they know that, instead of feeling "bummed out," they could be randomly commenting on parenting forums and telling other mothers how they should feel? What a waste.

If only there were more internet commentators who could simply tell women suffering from postpartum depression to "get over it." Everything would be so much easier for new moms. No, really.

Note: Postpartum depression is real. It is not your fault, you are not alone, and you are not a bad mother. To speak to someone now about whatever you are feeling, contact Postpartum Support International or call 1-800-944-4773 for nonjudgmental help from experts who work with women with postpartum depression all day, every day. Your baby will not be taken away, but you will get the help you need and deserve.