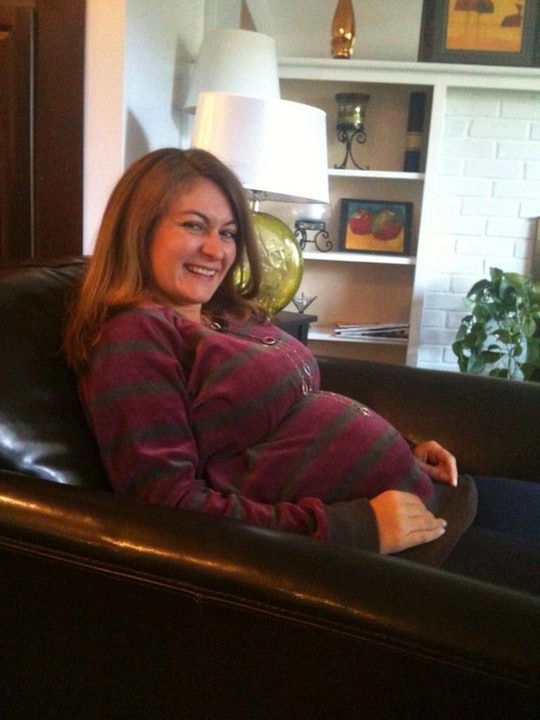 Once I learned I was having twins, I couldn't wait to find out what I was having. Was it two boys? Two girls? (My husband's biggest fear.) Was I having one of each, which was my secret wish? Or was there perhaps actually only one baby floating around in there and a bunch of undigested tacos that had taken on a vague fetus-like shape and confused the doctors? The suspense was killing me, but I knew that I had to wait until the infamous 20-week anatomy screening to find determine the gender of my babies.

Having twins is considered a high-risk pregnancy. While that meant I was more likely to wind up on bed rest (check), deliver my babies early (check), and have complications during my pregnancy, (like cholestasis and an emergency c-section) one of the few perks of having a twin pregnancy (besides people always trying to feed you) was that I got a sneak peak at my babies with an ultrasound every time I went to the doctor for a checkup. By the end of my pregnancy, I had enough grainy black-and-white ultrasound shots to fill and entire baby book. In some, you can just barely make out a profile. Others look more like Rorschach tests.

Even though I asked the ultrasound techs at every visit, they weren't able to give me any hints about what was or wasn't between my babies' legs. I hate not knowing things, so I grew more and more curious and anxious to know the gender of my babies. As the anatomy scan approached, I began to build the what-if scenarios up in my head. It became hugely important for me to have three sets of names going into the ultrasound so that we were prepared for any outcome. I knew that I'd be happy no matter what the gender of my kids turned out to be, and that having healthy babies was more important to me than the specific sexes of my children, but I wanted desperately to start envisioning what life with my kids would be like, and I was having trouble doing that without names to attribute to the lives growing inside me.

Because I was in a pink and blue la la land, so the reality of what actually happens during the anatomy screening came as a huge shock to me.

Finally, the day I'd been waiting for at long last arrived. I knew from my baby book that during the anatomy scan they "checked for any abnormalities," but everything I'd read and everyone I'd talked to focused on the fact that this ultrasound was all about learning if you were having a boy or a girl. As I tried to get comfy on that crinkly exam table paper, all I could think about whether the room was rigged to drop blue and pink confetti from the ceiling when they announced the gender and if it wasn't, some OB should really get on that because I'd pay extra for it. Because I was in a pink and blue la la land, so the reality of what actually happens during the anatomy screening came as a huge shock to me.

The ultrasound tech dimmed the lights and put the jelly on my belly. I tried not to pass out as I clenched my partner's hand and told myself that this was just like the movies, except instead of watching it on a screen it was an actual pivotal moment in my life happening right here, right now. It felt very surreal. I expected her to turn to us with a giant smile and say, "Congratulations, it's a ____!" But she blew me away when she said. "OK, let's start at the top with the brain, shall we?" My partner and I looked at her, confused, and I managed to get out, "Aren't you going to tell us what we're having?" To her credit, she managed not to roll her eyes at me. She explained that we would get to the "goodies," as she put it, but we needed to check and make sure that nothing was developmentally amiss with the babies first. We would be going through each and every organ and bone in their bodies to make sure everything was growing as it should, ensuring nothing was wrong.

I'd expected to feel excitement over knowing that I was going to have a baby boy to hold soon, to be thrilled that I was going to get to use the name Jeremy, a name that was very personal and special to my partner and I, but instead all I wanted to know is whether or not his bladder was the right size for his gestational age.

Her words sent alarm bells off in my head. "Something is wrong with the babies?" I asked, then looked at my husband and asked him, "What does she mean there could be something wrong with the babies?" This entire time I was expecting a quick trip to the doctor's office followed by a bakery run to get some pink or blue cupcakes, or maybe even both. But I'd suddenly realized the anatomy ultrasound was actually really serious, and that we could be in for something life-changing that afternoon. My heart started to pound harder but no longer from excitement, but out of fear.

My OB started going through all of Baby A's organs one by one. My partner is an anatomy professor, so it all made sense to him, but with each sentence I didn't know if I should be relieved or upset. Four chambers in the heart is a good thing, apparently. We counted kidneys and liver sections and fingers and I held my breath and shifted back and forth on the table so we could confirm that the baby did, in fact, have two thumbs. When she finally announced that Baby A was a he, I barely even heard her. I'd expected to feel excitement over knowing that I was going to have a baby boy to hold soon, to be thrilled that I was going to get to use the name Jeremy, a name that was very personal and special to my partner and I, but instead all I wanted to know is whether or not his bladder was the right size for his gestational age.

There was no time to process the fact that we were having a boy before we moved on to Baby B. Time is money in hospitals and ultrasounds technicians are always booked back to back in our facility, so I understood that there wasn't time for her to pause and let us collect ourselves, but my head was reeling from so much information. We were counting Baby B's toes before I ever realized she'd told us he was a boy as well.

In the end, I got what I wanted, two healthy babies and some delicious cupcakes following my anatomy ultrasound, but I wish I'd known that the 20-week ultrasound is about so much more than finding out whether you're having a girl or a boy. Had I been more prepared to talk about the rest of my babies' biology, perhaps I wouldn't have been so anxious. Or had I known that we would be talking about so much in one day, perhaps I would've asked the technician to write the genders on a card for my partner and I to open later so we could focus on that separately, apart from worrying about our babies' health. Had I known what was waiting for me that day, I would've prepared for a biology exam instead of a celebration.

Don't get me wrong, I was (and am) so happy my boys are healthy, but I'll always be a little bit disappointed that I didn't get that picture-perfect "You're having twin boys!" gender reveal moment I'd envisioned in my head.