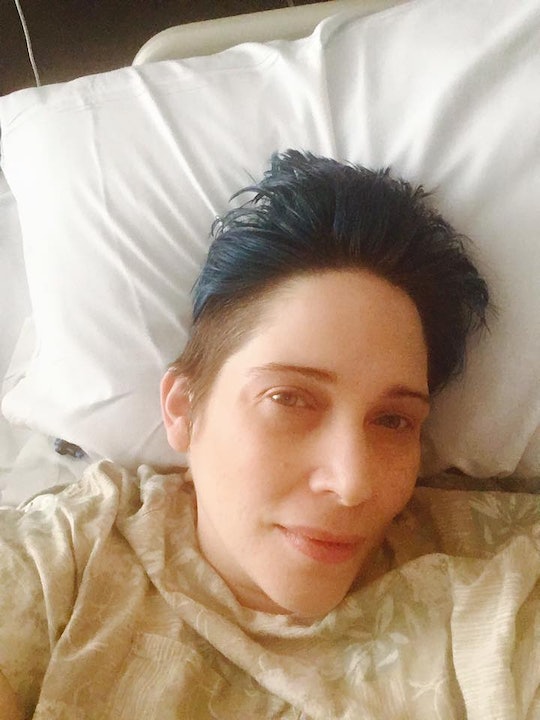 In Defense Of Wearing Makeup During Labor & Delivery

The first comment on my Facebook post announcing my son's birth read as follows: "Are you wearing makeup? Why, tho?!?" Yes I was, in fact, wearing makeup, and I wasn't at all ashamed about it. I responded with a curt, "Why not?" and added a smiley face to soften the tone. I wanted to say a lot more, though. Like, an entire dissertation in defense of wearing makeup during labor and delivery — not just because I chose to wear makeup during my son's birth, but because it's nobody's business what a laboring person chooses to do with their body, even if that includes wearing makeup in the delivery room.

Mostly, though, I wondered why anyone would care. Seriously. I guess it's flattering that someone would be so invested in my childbirth experience that they felt the need to focus on my personal grooming habits to comment about them on social media. Or maybe it's that they thought I looked too good to have just spent seven hours in labor. I guess I could take it as a compliment of sorts' that they absolutely had to point out that my glow or lack of under-eye circles couldn't have possibly been "natural." On the other hand, why completely derail a thread about birth of my child, and over some concealer and lip gloss? Talk about taking away from the work I had just put in to bring another human being into the world.

I honestly think women can't win when it comes to wearing makeup. I learned early on about the unreasonable and often contradictory expectations people have when it comes to my appearance. Women are supposed to achieve an ideal, including but certainly not limited to smooth, even, wrinkle-free white skin, with the glow of a summer tan, no blemishes, freckles or lines, full lips, a thin face, sharp cheek bones and jaw line, perfect brows, long lashes, and without the hint of any makeup. This look should be "natural," even though it seldom is, and should be achieved effortlessly.

When the Duchess of Cambridge, Kate Middleton walked onto the steps of the Lindo Wing of St. Mary's Hospital in London, with amazing post-birth hair and makeup, I was shocked to see people shame her on social media.

So, we learn at a very young age that we'd better try to emulate the looks we see on magazine covers and Instagram, without actually acknowledging that it takes time and effort. According to one study, reported by the Guardian, two-thirds of employers would discriminate against women employees and job candidates if they didn't wear makeup. Additionally, as Fortune reported, another study found that wearing makeup can mean a higher salary for women, too — about $6,000 more per year, compared with those who don't.

Not surprisingly, a 2017 poll conducted by the survey website Yougov.com found that most women think they are held to unrealistic beauty standards. The survey also found, however, that most men (63 percent) think that women wear makeup to deceive people into thinking they are more attractive than they really are. Unsurprisingly, only 37 percent of men felt the same way about men growing beards, proving, once again, that women really can't win when it comes to how we look.

So I've reclaimed what many assume to be a choice made with other people in mind, and have repurposed it to help me feel powerful in a moment when I was vulnerable and in pain.

We live in a culture that seems to simultaneously expect women to "make an effort" and "doll themselves up," but not too much, lest they be shamed for being "high-maintenance" or looking "unnatural" — as if anyone naturally has red lips, black winged eye-liner, or matte skin. When the Duchess of Cambridge, Kate Middleton walked onto the steps of the Lindo Wing of St. Mary's Hospital in London, with amazing post-birth hair and makeup, I was shocked to see people shame her on social media. I, for one, thought she looked amazing. #momgoals

Some moms on Twitter thought it was too much, though, and took to Twitter to express their displeasure:

Some people did have positive things to say, though. I mean, she looked amazing, and she just had the audacity to do it while also being a new mom.

Others made good points about the kind of message this sends to postpartum moms. I mean, in her situation, Middleton may or may not have liked the expectation that she smile for the cameras in full hair and makeup... and right after giving birth.

Of course, I am not suggesting that we expect women to look Insta-ready right after they give birth. That is completely unreasonable. However, if a new mom wants to wear some during or after giving birth, that's totally OK with me, too.

As for whether wearing makeup, dying my hair, or wearing Spanx make me fake? I don't think so. For me, makeup is fun. Besides, I wear makeup for myself and nobody else. I love trying new eye shadow palettes and lipsticks in all the colors of the rainbow. I adorn my pale cheeks with shimmery purple highlighter and bake concealer under my eyes to see if I can erase the lasting impact of years of sleep deprivation. Sometimes, I even put makeup on, and then wash it off without showing anyone accept my toddler.

Wearing makeup makes me feel confident and empowered — like I can take on the world. I needed to feel that way during childbirth

So, if you think that I am trying to fool people into thinking that my lips are a naturally glossy purple or red, or that my sleep deprived mom under-eyes aren't permanently circled and lined, you must not be well-versed in what new moms actually look like.

And while I used to wear makeup, because people expected me to, I now wear makeup because I like it. Honestly, no matter how you feel about wearing makeup yourself, it's just as offensive to judge a woman for choosing to put on makeup during labor and delivery as it is to judge her for choosing to not wear makeup. The important word in this equation is choose.

Wearing makeup makes me feel confident and empowered — like I can take on the world. I needed to feel that way during childbirth. Because guys, it was hard. So hard. So I've reclaimed what many assume to be a choice made with other people in mind, and have repurposed it to help me feel powerful in a moment when I was vulnerable and in pain.

Now, I am definitely not saying that anyone should ever feel pressured to look a certain way, especially while doing what is arguably one of the hardest things imaginable. However, those of us who want to put on a little (or a lot) of makeup during labor (or afterwards) shouldn't be shamed for making a decision that we feel is best for us. We have got to stop shaming women for what they do with their own damn bodies, especially when they're giving birth.