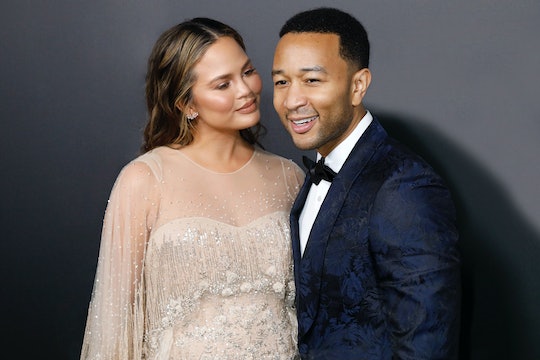 If you were surprised when Chrissy Teigen revealed her baby bump in her husband's new music video last week, you're not alone. In fact, during a new interview with TODAY, John Legend said Chrissy Teigen's pregnancy with their third child was a sweet little "quarantine surprise" and they couldn't be happier about their little one on the way.

"It was a surprise, a little quarantine surprise, I guess you could say," Legend said during an Aug. 17 appearance on TODAY. "But we're very excited, and we're very grateful for all the well wishes that we've gotten from people all over the world. Thank you so much."

The singer talked with TODAY about his music video for his new single "Wild," which heavily features his wife. "My costar is a very well known, well respected former super model turned cookbook author and celebrity personality," Legend told the news outlet.

Although the entire music video is gorgeous, the ending is really the cherry on top. In the end, Legend cradles his wife's bump, revealing their little "quarantine surprise" to the world. Teigen later confirmed the news in a video on Twitter. While showing a side-view of her bump, she said, "Look at this third baby sh*t."

In a series of tweets over the weekend, Teigen also confirmed that this pregnancy was a surprise. After struggling with infertility during her first two pregnancies (her daughter Luna and son Miles were both conceived through IVF), she tweeted that she didn't think she could "get pregnant naturally." "We joked about allllllll the people having corona babies, we really did," she added. "'Couldn't be us!!'"

Not only was learning about the baby a surprise for Teigen and Legend, but so will the sex of the baby. In 2016, while Teigen was pregnant with her daughter Luna, she told People that she specifically chose to implant a female embryo. "I picked her and was like, 'Let's put in the girl,'" Teigen said. In a now-deleted tweet from 2017, before Teigen was pregnant with their son Miles, she confirmed that her next pregnancy via IVF would be a boy "because that is the embryo we have left."

"When you give up on trying," Teigen tweeted about baby #3, "life has a way of surprising you."