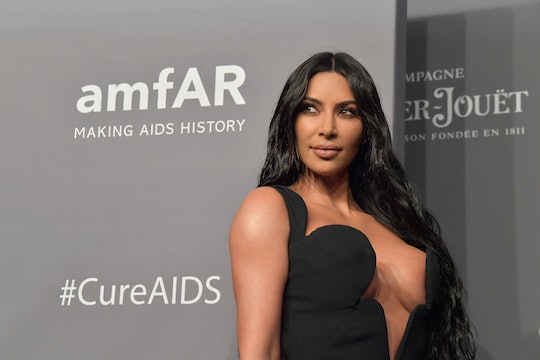 I intentionally don't keep up with the Kardashians, but every now and then a tidbit of information about their lives finds its way into my orbit. Usually, it's the result of a lot of judgement and shame aimed in their general direction. So here I am, all salty and annoyed, defending Kim Kardashian's fourth baby shower and explaining why judging a mom for the number of baby showers she decides to have is, let's face it, ridiculous.

Kim and husband Kanye West are expecting Baby number four (via surrogate) in the coming weeks. At the recent launch of her new sunglasses line for Carolina Lemke, Kim told E! News that she is planning to have a "zen" CBD-themed baby shower. There will apparently be crystals and a tea ceremony and booze. My reaction was the same as my reaction to most Kardashian announcements: a gentle eye-roll followed by a passive, "OK. Whatever." But then y'all had to chime in with your two cents and you didn't have to do that but you did and now I have to do this.

The internet, being the internet, opined with their hot takes and big feels. Some people got all pearl-clutchy about the idea of CBD in general (guys, come on now...), while others expressed their general disdain over the entire Kardashian clan (if you hate them so much why are you commenting?!). Another very common refrain, of course, was people scoffing about the idea of a fourth baby shower at all.

Hey guys? Guess what? You're not invited. No one is asking you to take time out of your weekend to go hang out with the Kardashians and give a gift to a pair of eccentric millionaires. This does not in any way affect you or your life.

Still, people are pretty upset over the so-called principle of the thing. The idea, it seems, is that any pregnant person is allotted one baby shower, and one baby shower only. After baby number one pregnancy, and a reason to celebrate it, become a little old hat. We've been there, we've done that, and apparently there's no reason to do that again.

Some people just want to have a mother-lovin' party and will leap at any excuse and WTF is wrong with that?

But there is reason to "do that again." Pregnancy is difficult, regardless of how many times you've experienced it, and having a baby is always exciting, whether it's baby number one or baby number 12. (OMG, please don't have 12 babies.) And whether or not a pregnant person has a baby shower after their first baby usually varies regionally, culturally, and family to family. There's no solid consensus as to the "appropriate" amount. Different people have different traditions and different thoughts on the subject. If your thoughts and traditions line up with "one shower only," fine. Live your truth, my darling, but let other people live theirs.

Some people like to have a shower for every baby because they want to celebrate each individual child before they arrive. Some people have baby showers if a lot of time has lapsed between births. Some people forgo a "shower" in lieu of a "sprinkle," emphasizing that this isn't about getting gifts, but more about celebrating the pregnancy and the future baby. Some people don't even choose to have a shower: loved ones throw one on their behalf.

Some people just want to have a mother-lovin' party and will leap at any excuse and WTF is wrong with that? Let Kim enjoy her crystals and her tea and her boozy, CBD-laden afternoon. Let her revel in the opportunity to chat with her friends and family about how excited she is to meet her son. It sounds like a very pleasant afternoon and, honestly, what else would you have her do with her time? As far as "ways a reality TV star could spend their time" goes, this seems like a pretty good option. (Though, to her credit, Kim has stepped up at times.)

Kim's second baby via surrogate also plays into her motivation. The soon-to-be mom of four told E! News, “When you have a surrogate, for me, I realized that having a baby shower for [third child] Chi was actually so much more beneficial for my kids [North and Saint], because they saw people come. They actually saw that it was like, ‘A new baby is coming.'"”

Let people throw a party if they want.

When you're pregnant, you and your immediate family have a daily visual reminder that something's up. Something is about to change. Sometimes you can even put someone else's hand on your belly and let them feel your fetus moving around. That kind of preparation can be really helpful for kids, who are used to routine and might need help adjusting to new circumstances in any case. When that gradual reveal isn't possible, a big ceremony might be just the thing to help the kiddos realize that this is happening and the "this" is going to be fun.

While I don't want to put words in Kim's mouth or anything, I can imagine that as a parent using the services of a surrogate, there have to be a lot of emotions to go through, same as any expectant parent. But since the circumstances are different than those of most new moms, and you might not have as many people around you who "get it," marking the occasion in a big way might be a great outlet to process your thoughts and feelings.

So, truly, there isn't a limit on baby showers. You won't find a Federal, state, or even local statute dictating how many you're allowed to have or have to have. In the end and always, it's entirely up to you. If you don't want to go to someone's shower because you find them annoying, whether it's their first or fourteenth, that's entirely up to you and you're welcome to stay home and watch a Law and Order marathon instead. But, like, it's a party. Let people throw a party if they want.