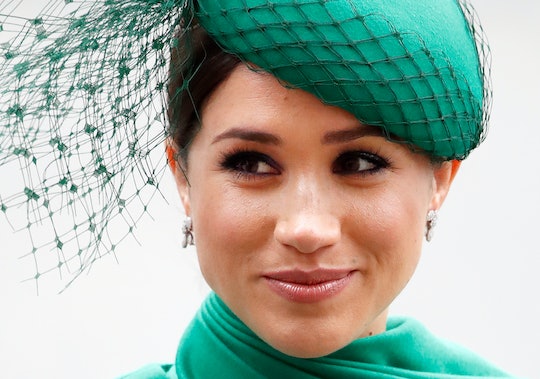 After not being able to fully express herself about subjects like politics and social injustices while working as a senior member of the royal family, the Duchess of Sussex is doing just that back home in the United States with her husband Prince Harry and their son Archie. In fact, Meghan Markle said it's "good to be home" and using her voice again during an inspiring conversation with Emily Ramshaw, CEO and co-founder of the 19th.

More Like This
“He Is Hysterical”: 12 Of Meghan & Harry’s Cutest Quotes About Archie
Meghan Markle & Prince Harry Donated Cute Beanies For Archie’s 2nd Birthday
11-Year-Old Meghan Markle Would Be Proud Of Her New Partnership
Meghan Markle Reportedly Doesn't Want "A Big Baby Shower" As Her Due Date Nears

Earlier this year, Markle and her family moved to California, months after announcing their decision to step down as senior royals and plans to become "financially independent." In the midst of their transition, calls for racial justice in the United States were happening all around the world following the death of George Floyd, an unarmed Black man who died in police custody in May. While speaking with Ramshaw, whose organization aims to empower women to participate in politics, Markle said she witnessed a "silver lining" during this time.

"It was so sad to see where our country was in that moment," Markle said. "If there's any silver lining in that, I would say that in the weeks after the murder of George Floyd, in the peaceful protests that you are seeing, in the voices that were coming out, in the way that people were actually owning their role... it shifted from sadness to a feeling of absolute inspiration, because I can see the tide in that turning."

Markle added that she looks forward to lending her own voice to these shifting tides. "From my standpoint, it's not new to see the undercurrent of racism and certainly unconscious bias, but I think to see the changes that are being made right now is really — it's something I look forward to being a part of," she said. "And being part of using my voice in a way that I haven't been able to of late. So yeah, it's good to be home."

The Duchess of Sussex has long been a vocal advocate for gender equality and has also been open about her experiences with racism. But during her time as a senior member of the royal family, it's speculated that Markle had to remain relatively quiet or neutral on issues because of Queen Elizabeth II's "impartial relationship" to politics, according to Time. "You've got to be careful in terms of how anything reflects on the Queen," CNN royals commenter Victoria Arbiter told the magazine. "She's a politically neutral head of state. And the family is very careful in terms of where they go, because they can't cause her any embarrassment."

But now that Markle is back in the United States and living a more independent life with her family, she has been using her platform to speak out about important issues. Over the past few months, for instance, both she and Prince Harry have vocally supported the Black Lives Matter movement and talked about the importance of acknowledging racial bias and engaging in difficult conversations.

"We have to, in this moment in time, say 'We're going to have to be a little uncomfortable right now,'" Markle said during a video chat with leaders from the Queen's Commonwealth Trust in July. "Because it's only in pushing through discomfort that we get to the other side of this and get to a place where a high tide raises all ships. Equality does not put anyone on the back foot, it puts everyone on the same footing, which is a fundamental human right."

It's certainly good to have the Duchess of Sussex back home.