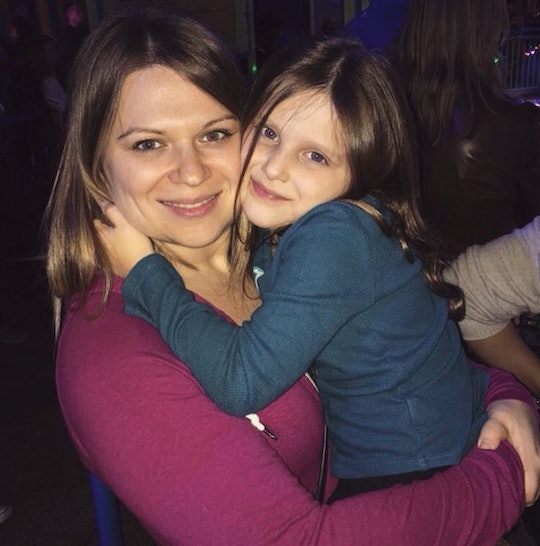 My Daughter Is Obsessed With Being "Pretty" & I'm Way Past Terrified

Last week, when I picked up my daughter after school, she immediately wanted to know if I liked her hair. "Is it pretty?" she asked. Her hair was pulled up into two ponytails that were intertwined into thick, long braids. A shimmering pink and purple sequenced headband adorned the top of her head. The excitement in her eyes pierced me. "Do you like my braids?" she prompted me again. A slight ripple of heat stymied me for a few seconds. I knew why I was temporarily speechless, too. My daughter is obsessed with being pretty and I am way past the point of being terrified. So what do I tell her? Of course she looks pretty. My daughter is beautiful. But do I want to validate her preoccupation with her appearance? No. Not even a little. So, after taking a beat, I said, "You hair looks very cool. Those braids must have taken some major skills." She was mildly satisfied with my response, so I continued on. I told her, for the hundredth time, that she, as a person, is awesome. I reminded her that looking "pretty" isn't the goal, being "pretty" isn't a badge of honor, and trying to accomplish "pretty" should never be her primary objective.

Navigating these types of conversations is always difficult for me, partly because I feel like a fraud. I can't pretend appearance doesn't matter in our world, that would be naive and hypocritical of me. I can't say, and won't say, that those who fit the "conventionally beautiful" mold don't have it easier in life. Everyone knows pretty people "get ahead." But I can honestly, without a single doubt, say I wish it didn't matter. I wish what you look like, how thick your hair is, the size of your eyes and lips and hips, or how trendy your outfit is, didn't matter. I wish I lived in a society that cares about you. I wish I navigated a culture that cares about what you know and how you treat others. But I do not. I do not live in that world, and neither does my daughter.

When I was a little girl, I never once "did" my hair. I'd throw it up in a ponytail and away from my face and go to school. I wore whatever clothes were available when I went outside to play with my friends. I viewed clothes as a necessity and not an extension of me. To this day, my closet is full of mostly jeans, t-shirts, and sweatshirts, with a few nicer outfits I can wear to social gatherings and work. I seldom wear makeup. In fact, most of the time my makeup bag is abandoned somewhere in my bedroom. My everyday routine includes a shower, some sort of quick blow dry or ponytail, and a comfortable enough outfit that is also work appropriate. That's it. My daughter, however, takes at least 30 minutes to get ready for school, and 30 minutes for an 8-year-old is way too long. Her routine includes carefully choosing her clothes and accessories for the day, playing with her hair until it's "just perfect," and selecting the shoes that match the outfit of the day. She's only 8 and she already cares what she looks like. Only 8 and last Sunday she tried to wear lip gloss to her math tutoring class.

I believe we've had all the "right" conversations. We've talked about the power of her being, her intellect, her kindness, and her empathy.

When she was 3 she begged for princess dresses, and when I wasn't looking she mangled my brand new eyeshadow palette by covering her face with it. When she was 3.5 she painted her face with markers. As soon as she was just old enough to be able to brush her own hair, she started spending a significant amount of time playing with it. She insisted on wearing only dresses, and only the kind that twirled as she spun. She started looking at herself in the mirror, and analyzing her reflection, at age 4. At 5, she told me she wanted her own makeup, and I promptly replied with a solid "no." When she was 6 she was gifted a makeup kit, which I later tossed. Prior to her following birthday, I told all who were invited, "Anything but makeup. Please." She knows how I feel about makeup. She knows she is not allowed to wear it, and she knows why.

I believe we've had all the "right" conversations. We've talked about the power of her being, her intellect, her kindness, and her empathy. We've discussed that looks are superficial and are easily manipulated, but how you treat others is what makes you the person you are. I've offered her examples. I've appealed to her from every angle I could fathom. I've often encouraged her to express her individuality with her clothes: "Be creative and have fun," I'd say. And still, she doesn't ask if her outfit is creative. Instead, she asks if it's "cute."

So, once again and as I continue to try to master this parenting thing, I've found myself running with all my might right into a wall. A wall I seem to be constantly trying to move all on my own. A wall of messaging to little girls about the importance of their external beauty.

So, once again and as I continue to try to master this parenting thing, I've found myself running with all my might right into a wall. A wall I seem to be constantly trying to move all on my own. A wall of messaging to little girls about the importance of their external beauty. A wall of placing way too much value on how your hair looks. A wall of nonstop preoccupation with appearances.

Some days, when I watch my daughter stand in front of a mirror, with her hands on her hips, admiring herself, I think, "Maybe this is good. She is confident. She is creative. She's excited. This isn't bad. Why am I even worried?" And, then she turns to me and asks again, "Do I look cute?" and I am, once again, breathless. "Yes, you look cute," I think, "But you're so much more than that." My daughter is so much more than "cute," so why does she already believe that being "pretty" is so damn important? Because she believes it, I can tell. She has already figured out what our society excepts from girls and women. She has cracked the code. And no matter how often I tell her the code is flawed, and the code is a crack in a broken system, she no longer believes me. And, I? Well, I've hit another wall.